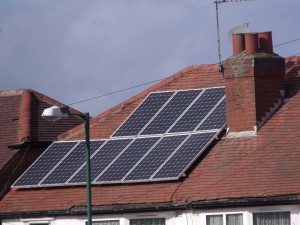 As the price of installing a solar PV array continues to fall, you may be wondering whether it is time to get in on the act and consider installing such a system on your own rooftop.

Just how quickly are prices for solar falling?

This was a popular topic at the recent World Energy Future Conference in Abu Dhabi in January. In many parts of the world, costs for solar are cheaper than fossil fuels, as shown by the International Renewable Energy Agency report Renewable Power Generation Costs in 2014. Deutsche Bank also expects solar PV to reach grid parity (that is to say competitive with conventional fossil fuels) by 2017.

One of the main reasons for installing solar is that it is a very good way of reducing your energy bill, although you may also want to play a part in driving down the country’s greenhouse gas emissions by making your energy consumption cleaner, that is to say not reliant on fossil fueled power sources such as coal power stations or oil-based generation.

Fortunately, there are a number of websites out there on the internet that can help you find out more about how to do this. One of these is Project Sunroof.

The aim of such websites is to make the process of installation a lot more accessible, providing information that anyone can understand. Project Sunroof is based on expansive data and computer resources used by Google for mapping in order to help you calculate the best solar plan for your roof. All you have to do is provide your address and Project Sunroof then looks up your home on Google Maps. This information is then combined with other data from databases to create a personalized roof analysis based on the amount of sunlight reaching your rooftop over the course of one year.

Google has an extensive database of aerial imagery which it uses for Google Maps and Google Earth. Project Sunroof also uses 3D modelling of your roof and examines the shadows cast by nearby trees and structures. Other parameters include all the positions of the sun over the course of the year and cloud and temperature patterns that may affect the amount of solar energy your panels can generate.

This information is then used to provide a recommended installation size so that you can generate an amount of electricity as close as possible to 100 percent renewable energy generation. It also draws on current solar industry pricing data to consider the best option, whether that is leasing, a loan or purchase, as well as assessing incentives such as Feed-in Tariffs, federal and state tax credits, utility rebates and renewable energy credits and net metering.

In general, you are likely to benefit from solar if your roof isn’t heavily shaded by nearby trees and is in a good condition. Solar panels do not need much maintenance. Inverters may need replacing after their 10 year warranty expires, but that’s pretty much it. The higher quality solar panel arrays can last for 30 years or more. They can also generate electricity on cloudy days, because solar PV cells react to light, even if there is less of it when the sun isn’t shining. The best roofs for generating solar power are those that face south or southwest.

Solar panels can cut your electricity bill by half. The average price for a good system has now fallen to between £6000 ($9406.50) and £9000 ($14104.44), but some retailers, such as Ikea, are selling even cheaper systems for around £5,700 ($8933.78). With cuts in Feed-in Tariffs and other incentives supporting solar, the ability of solar to generate an income has naturally been reduced. However, given that the cost of natural gas and oil is undoubtedly going to rise steeply again at some point in the future, the purchase of a solar panel system will help you to futureproof your energy supply against future fuel price rises.

Furthermore, a solar PV system will add value to your home. A survey conducted in 2009 by YouGov found that most home buyers rank energy efficiency as the third most important consideration when buying a new property.