A U.S.-based team of neuroscientists developed a way to use strategically placed electrodes to boost study participants' natural memory ability.

Those who severely struggle with remembering important events, data, and information now have hope. A new implant uses a person's own memory patterns in order to boost the brain's natural ability to encode those memories and quickly recall them.

The innovative proceedure came together as a result of scientists from Wake Forest Baptist Medical Center in partnership with researchers from the University of Southern California (USC).

The study, which was published in the most recent edition of the Journal of Neural Engineering, reported a 35 to 37 percent increase over baseline measurements in short-term memory performance.

"This is the first time scientists have been able to identify a patient's own brain cell code or pattern for memory and, in essence, 'write in' that code to make existing memory work better, an important first step in potentially restoring memory loss," said the study's lead author Robert Hampson, Ph.D., professor of physiology/pharmacology and neurology at Wake Forest Baptist.

The researchers used epilepsy patients from Wake Forest Baptist and surgically implanted electrodes placed in various parts of the brain where patients' would typically suffer from seizures. The team would then use its electronic prosthetic system that's based off of a multi-input multi-output (or MIMO) mathematical model to influence the patterns of neurons firing within the hippocampus.

The team first recorded the neural patterns (or "codes") of the participants while they performed a simple memory game on the computer. The patients would see an image and then identify that image after the screen went blank. The USC biomedical engineers then analyzed the recordings of correct responses and synthesized a MIMO-based code to determine what correct memory performance looked like for participants.

In a second test, the participants were shown a very detailed photo, then given a delay, and then they were told to identify the first photo out of others on the screen. The team repeated this memory game with participants as they recorded the neural patterns. 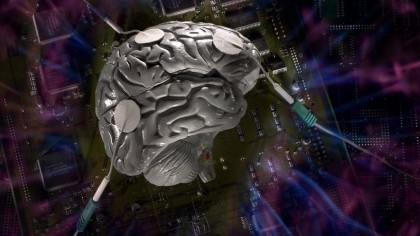 The team then put participants through a longer delay before showing them sets of three pictures at a time with both new and original photos. Participants had to then identify the original photos which they first saw over an hour prior. The participants who were stimulated with the MIMO-based correct-answer codes saw a 35 percent improvement in their memory in this area over baseline.

"We showed that we could tap into a patient's own memory content, reinforce it and feed it back to the patient," Hampson said. "Even when a person's memory is impaired, it is possible to identify the neural firing patterns that indicate correct memory formation and separate them from the patterns that are incorrect. We can then feed in the correct patterns to assist the patient's brain in accurately forming new memories, not as a replacement for innate memory function, but as a boost to it.

"To date we've been trying to determine whether we can improve the memory skill people still have. In the future, we hope to be able to help people hold onto specific memories, such as where they live or what their grandkids look like, when their overall memory begins to fail."

While it might seem that this implant would only affect people with the short-term memory as bad as Finding Nemo's Dory, the team said the implant's impact could be expanded into more long-term memories.