Puma is calling for tech-savvy people to help test their new shoes.

Puma has released its latest iteration of self-lacing shoes. The new sneakers called “Fi” for “Fit Intelligence” can adapt to their wearer's foot when they swipe a module on the shoe's tongue.

SEE ALSO: Back to the Future: 7 Technologically Advanced Sneakers

A micromotor triggers a pair of cables that tighten the shoe to the wearers' preference. Tightness can also be adjusted through an iPhone and on the fly, micro adjustments can be made with an Apple watch.

Shoes created for the future

“We have created a product that speaks to the future of sport which is life in motion. It’s fast and changing all the time,” said Charles Johnson, PUMA’s Global Director of Innovation. Puma’s release comes hot on the heels of Nike’s latest self- lacing shoes.

Similar to Nike, Puma’s futuristic kicks don’t come with any embedded tracking ability, which for many seems like a lost opportunity. Puma's recent reboot of its 1986 RS-Computer can record distance, time, and calories.

Fi’s are charged via a Qi wireless charging pad and off a full charge should let you train and self-lace for about 5 days. The sneakers are relatively minimalist in design, appearing in the current promotional material in dark charcoal, with a silver logo and electric blue cabling.

Puma says the shoes are good for a range of training activity and are built to survive both urban and gym environments. As part of the marketing hype around the release, Puma is calling for tech-savvy customers to help them beta test the shoes.

“Fi is a platform that can be used for many different things. We want to learn what those things are from people who have experienced it,” said Johnson. Selected testers will be asked to give feedback on the usability, design, engineering, and wearability of the shoe.

If you have a love of sneakers and consider yourself tech-savvy, sign up to the Fi Beta Test program through PUMATRAC, PUMA's training app which is available on the App Store and on Google Play. PUMAtrac users will be alerted when the best testing period starts in their location. The final consumer show will go on sale in 2020 and retail for approximately $330.

What both Puma and Nike seem to have failed to take advantage of is the usefulness of its self-lacing shoes for people with mobility issues. Laces can pose a major challenge for amputees, elderly or other with hand control limitations.

Michael J Fox, the actor who famously played Marty McFly in the Back to the Future movies series has Parkinson's Disease, a chronic illness that affects patients fine motor skills and mobility. 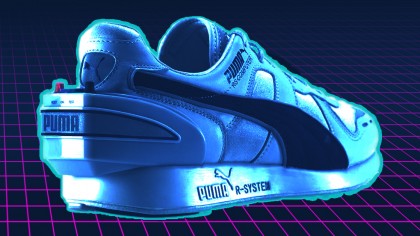 Puma Re- Releases its 'Nerdiest Shoe': the 1986 RS-Computer

In 2016, close to the anniversary of the original B2TF film, Nike teamed up with the Michael J Fox to release a limited edition series of Nike Mag sneakers.

The shoes had adaptive technology that tightened each shoe with just a touch of the button. Only 89 pairs were available globally through an online draw to draw attention to the fight against Parkinson’s disease.

Hopefully, both Nike and Puma can continue to develop their adaptive wearable technology to the application beyond able-bodied athletes.

Improve Your Focus with This Cognitive Biometric Device