After 11 days of being stuck in a borehole, a puppy has been freed in Istanbul thanks to some simple engineering.

The 3-month-old puppy named Kuyu ("well" in Turkish) became stuck in a pit 30 centimeters (roughly 1 ft.) wide. Locals heard the puppy's cries and alerted authorities who rushed to the scene. Locals and animal activists tried to reach the dog, but it was clearly stranded at the wider bottom of the hole. Despite not reaching the dog, locals made sure it remained fed by dropping food and water via rope into the hole. 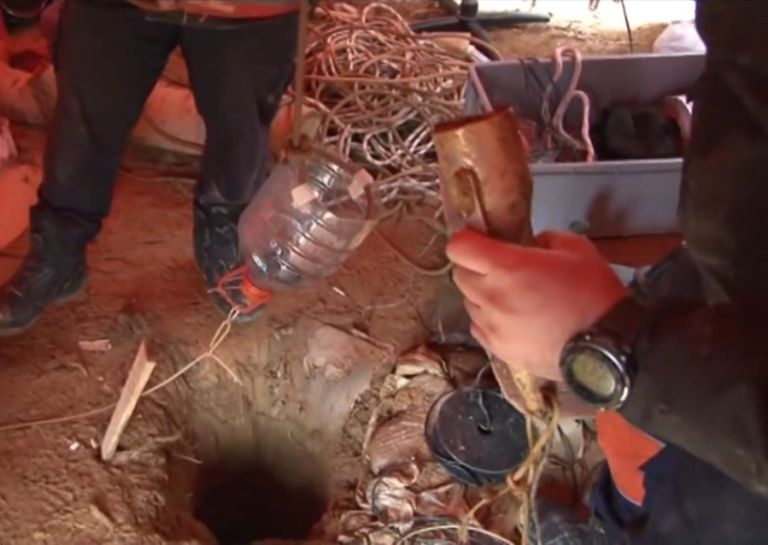 Once emergency services arrived, they tried rigging up any number of contraptions. They even used a robotic arm developed by a local high school robotics team to try and reach the dog. Turkish Hard Coal Enterprises (a state-owned mining company) ultimately saved the day.

Local media credited a firefighter named Veysel Sivri with designing the technology that got Kuyu out. He crafted a quick pneumatic piston cylinder to pump air into the hole. He then connected the air pump to a controller attached to a night-vision camera. He recounted the rescue for the Daily Sabah:

"It can operate freely in a narrow space, and after some hours, we managed to corner (the scared) dog in a corner, and with a lasso (similar to a leash) grabbed it by the neck. Then we pulled it to safety."

You can watch the moment of rescue in the video below:

Street dogs aren't uncommon in Istanbul. Estimates vary between 70,000 to 150,000 strays live on the streets of the city. However, these dogs have become an assumed part of Istanbul's culture. Some vendors leave food outside their doors to feed whatever street dog might be hungry.

In 2012, thousands of protestors took to the streets in response to proposed changes that would allow the city to euthanize some of the strays. While these dogs might not have homes of their own, they certainly have people fighting for them.

Barış Şengün, a coordinator for the Animal Rights Confederation in Istanbul, noted that this instance reminded him of something important:

"We see that people now value animals as much as human beings in Turkey; we see a public more aware of animals."

As for Kuyu, his new home will be with the Beykoz Municipality Fire Department.

Russian tanks might be stuck in the mud near Ukraine. Here's what we know