MekaMon is an augmented reality enabled robot that lets you battle against your friends.

Goodbye board games and hello smartphone controlled fighting robots. MekaMon robots have inbuilt augmented reality (AR) technology so you can battle in both the real and augmented worlds.

The robots resemble a four-legged spider and use four infrared sensors (IR) to measure distance and location so they can accurately hunt and attack robot opponents. Once you have your MekaMon robot you can upgrade and customize it with new legs, shields and even weapons. Weighing roughly a kilo the robot connects to your smartphone via Bluetooth and communicates with opponents via IR.

The robots are surprisingly tough and can stabilize quickly, but gameplay is limited by the small battery life. You’ll only get an hour of fun before needing to recharge. The company behind the futuristic gaming idea is Reach Robots. They have included a backstory for the robots that make them even cooler. The story is set in 2076 after an alien invasion has ravaged earth. The remaining humans are fighting back using battle robots. The robots can be played in story mode, arcade mode, or battle with friends. Silas Adekunle, CEO of Reach Robotics describes the fun saying: “We’ve created an entirely new video gaming platform. Players can whip out their smartphone to battle their multi-functional, connected battlebots in the physical and virtual worlds at the same time."

To engage in battle you look through your phone's screen to maneuver the robots around your physical and digital battlefield. MekaMon is available now in either a white and black colourway from Apple and MekaMon.com for $395 USD.

If you are a fan of battling robots but the MekaMon option is a little pricey. There are other ways to get your robo-battle fix. Check out the North American TV show BattleBots. Competitors in the battle, design and build remote control armoured robots before pitting them against other teams in an arena. While BattleBots is entertaining it pales in comparison to the absolutely insane MegaBots project. 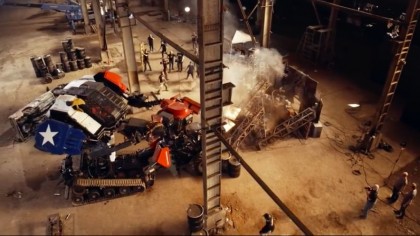 MegaBots is the brainchild of Gui Cavalcanti, Matt Oehrlein, and Brinkley Warren who created giant robots for real-life battles. To make the crazy project even more interesting, in 2015, they challenged Japan-based robot maker Suidobashi Heavy Industry to the world's first giant robot duel. Suidobashi accepted on one condition: that the fight includes melee combat. The Japanese team said at the time: "Just building something huge and sticking guns on it. It's Super American ... If we're going to win this, I want to punch them to scrap and knock them down to do it."

Japan versus U.S. battle a tie

MegaBots were up to the challenge and after some re-engineering of their 15-foot tall, 12,000lb robot they were ready. On the 17th of October this year the two robots finally met. The Japanese robot KURATAS would take on both the American Robots, Iron Glory and Eagle Prime In the first pair up against Iron Glory, the Japanese Robot used its agility and speed to completely knock out its competition. Winning the battle before the Americans could really even defend themselves. In the second battle, the American robot Eagle Prime used its stone crushing chainsaw to tear the Japanese robot apart to win the second battle.

This Tool Copies Real-Life Objects onto Your Desktop