Semiconductor and telecommunications equipment company Qualcomm unveiled this week the world’s first fully-integrated 5G NR millimeter wave (mmWave) and sub-6 GHz RF modules for mobile devices. The announcement is good news for the future of 5G on mobile networks, a development that has lagged due to both standard and modem issues.

The first commercial modules of their kind

“Today’s announcement of the first commercial 5G NR mmWave antenna modules and sub-6 GHz RF modules for smartphones and other mobile devices represents a major milestone for the mobile industry. Qualcomm Technologies’ early investment in 5G has allowed us to deliver to the industry a working mobile mmWave solution that was previously thought unattainable, as well as a fully-integrated sub-6 GHz RF solution," said Cristiano Amon, President, Qualcomm Incorporated.

"Now, these type of modem-to-antenna solutions, spanning both mmWave and sub-6 spectrum bands, make mobile 5G networks and devices, especially smartphones, ready for large scale commercialization,” added Amon. What all this means essentially is that these 5G enabling chips are finally small enough to fit in handheld devices.

And the useful upgrade has not gone unnoticed! The news has made headlines for solving one of 5G phones' biggest problem.

So far, mmWave signals were considered too impractical for mobile wireless communications due to a variety of technical and design challenges. However, Qualcomm's QTM052 mmWave antenna modules supported by the firm's Snapdragon X50 5G modem overcome these issues by significantly enhancing both the range and reliability of these signals.

“With 5G, consumers can expect gigabit-class Internet speeds with unprecedented responsiveness in the palm of their hands, which stand to revolutionize the mobile experience," explained Amon. The impressive innovation, however, had no impact on Qualcomm's dispute with iPhone maker Apple. 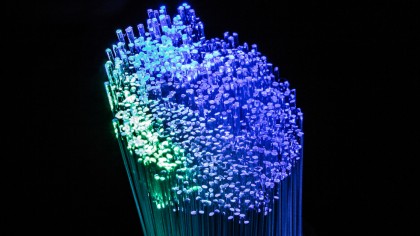 The same week as Qualcomm's record-breaking technology was unveiled the equipment manufacturer revealed the technology company will continue to snub their products. "We believe Apple intends to solely use our competitor's modems rather than our modems in its next iPhone release," Qualcomm financial chief George Davis said during an earnings call, according to CNET.

The news has people already saying that the next Android phones will be faster than iPhones. The trend is supported by a Qualcomm blog post that featured data by independent internet testing company Ookla whose latest analysis found Qualcomm's Snapdragon 845 chip far superior to Intel's XMM 7480 and 7360 modem chips.

During the same earnings call, Amon did leave a door open for his firm to work with Apple again. "This is a very dynamic industry. If the opportunity presents itself, I think we will be a supplier of Apple," he said.

The race to 5G has been happening for a while. We may just be witnessing the winner!