Quantum Biology: Spooky, Mysterious, and Fundamental to Life Itself

The emerging realm of quantum biology has much to teach us about the fundamental nature of life.

As little as a decade ago, scientists were sure that the chemistry of life and the weird chemistry of the quantum world were completely separate things. Quantum effects were usually observed only on the nanometer scale, surrounded by hard vacuum, ultra-low temperatures, and a tightly controlled laboratory environment. Biology, however, is a macroscopic world that is warm, messy, and anything but controlled. It seemed elementary that a quantum phenomenon such as 'coherence', in which the wave patterns of every part of a system stay in step, wouldn't last a microsecond in the tumultuous realm of the cell. It would be simply unthinkable.

Or so we thought…

Recent years have seen scientists finding coherent quantum processes all across the natural world. And it’s not just in some exotic halobacteria or flying marsupial, it turns out quantum biology is pretty much ubiquitous. In fact, it appears to be a central part in the most important chemical reactions on Earth: photosynthesis and cellular respiration.

Now… why should you care?

First, what is “quantum” again?

Niels Bohr, one of the founders of the field, said of quantum mechanics, “If you're not astonished by it, then you haven't understood it.” And he was absolutely right.

Quantum mechanics was developed in the 1920s and is at its core a set of mathematical rules and ideas that explain the world of the very small. And it's a world that's very different from the everyday one we experience, which is made of the sum of trillions of atoms. It's a world built on probability and chance, where particles can teleport unpredictably or with extreme precision, and then at times shift entirely to behave like spread-out waves.

In the quantum world, particles can even multitask, they can be in two places at once. They can do more than one thing at the same time. But this weirdness is very delicate, and physicists have to work very hard to maintain it in labs. They cool their systems down to near absolute zero, carry out our experiments in vacuums, and try and isolate them from any external disturbance. That's very different from the warm, messy, noisy environment of a living cell. And for many years, scientists operated on the idea that biology was merely a product of deterministic chemical reactions, and as such, unaffected by quantum effects.

But if we look at quantum mechanics or quantum physics as the fundamental foundation of reality itself, then it's logical to say quantum physics underpins organic chemistry. Organic chemistry, scaled up in complexity, gives us molecular biology, which of course leads to life itself. So in a way, it's sort of not surprising that quantum interactions would be important building blocks in life.

That wasn’t always so easy to say though. Well before quantum biology was proven to exist, one man realized something. Erwin Schrödinger, of Schrödinger's Cat fame, said: “At the molecular level, living organisms have a certain order, a structure to them that's very different from the random thermodynamic jostling of atoms and molecules in inanimate matter of the same complexity.”

And he was right. In fact, living matter DOES behave this way, in a structure, just like inanimate matter cooled down to near absolute zero, where quantum effects play a very important role. There's something special about the structure -- the order -- inside a living cell. Which is exactly why quantum mechanics is able to play such a big role in life.

One of the most important processes in all of biology is photosynthesis; the path through which plants and bacteria take in sunlight and convert that energy into biomass. For years, no one could figure out how the reaction could proceed favorably without a massive failure rate, the math just didn’t add up. But then, just a few years ago, the answer became clear: quantum coherence.

Quantum coherence is the idea of quantum entities multitasking. It's what happens when a physical particle behaves like a wave, so that it doesn't just move in one direction or the other, but can follow multiple pathways at the same time. The idea in photosynthesis is that the photon, the “quantum” of light captured by a chlorophyll molecule, is then delivered to what's called the reaction center, where it can be turned into chemical energy.

But what’s incredible is that in getting there, it doesn't just follow one route; it follows multiple pathways all at once to optimize the most efficient way of reaching the reaction center without dissipating as waste heat. It’s something that defies all reason and comprehension and yet, more and more evidence is stacking up that it is true. The spooky effects of the quantum world live among us.

One of the most beautiful uses of quantum effects in nature is with the migratory compass of the European robin. This bird migrates from Scandinavia down to the Mediterranean every autumn, and like a lot of other marine animals and even insects, they navigate by sensing the Earth's magnetic field. But the Earth's magnetic field is very, very weak; it's 100 times weaker than a fridge magnet. And yet it somehow affects the chemistry within a living organism. A built-in compass! 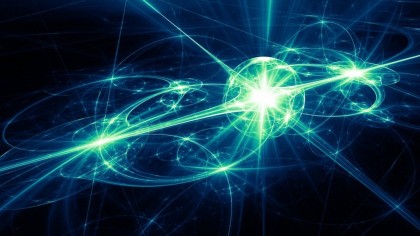 But how does it manage this? Well, in the case of the robin at least, with quantum entanglement. This is the term for when two particles are far apart, and yet somehow remain connected (and we have no good explanation for why—even Einstein called it “spooky action at a distance”). Somehow though, inside the robin's retina is a protein called cryptochrome, which is light-sensitive. And within cryptochrome are a pair of electrons which are quantum-entangled.

These electrons are far enough apart that the difference between the weak magnetic field interactions on each one is actually detectable, which allows the bird to sense whether it is flying towards or away from the equator. Now, just for reference, if coherence is a “delicate” process, entanglement may as well be neurosurgery with a chainsaw. It’s so hard to accomplish—we spend billions every year trying to make quantum computers that can do it a fraction as reliably as this. And yet this simple robin stands on the very cutting edge of life and its ineffable underlying processes.

The quantum horizon of biology

The examples looked into here are by no means the end of things. As mentioned, respiration relies on some level of coherence just like photosynthesis, and we are even learning that quantum effects are fundamental to the entire olfactory process too. Ultimately though, quantum biology is still in its infancy. It's still somewhat speculative. However, more an more research is piling up that only supports the idea that quantum mechanics pervades all of nature, and that rather than being unperturbed by the quantum world life has evolved tricks that utilize its vast peculiarities.

Furthermore, the study in this area could be the very thing that leads us to the next phase of human technological evolution. Things like the Robin’s ambient-temperature avian compass could be a potential guide to designing materials systems for quantum computing that are protected form decoherence. Learning from nature is an idea as old as mythology — but who would have imagined natural biology had anything to teach us about the quantum world?

…Other than Schrödinger, I suppose.