It's not about perfect robots, the YouTube star Simone Giertz noted in her TED Talk. It's all about the process and learning to cope with failure.

YouTube innovator Simone Giertz is known throughout the internet for her "shitty robot" videos. Giertz recently took to the TED Talk stage to explain why building such terrible robots is worth everyone's time.

Her quirky videos showcase Giertz attempting to quickly build a robot to accomplish the most ridiculous tasks.

A post shared by Interesting Engineering (@interestingengineering) on Apr 15, 2018 at 7:33am PDT

She started her talk by describing the first terrible robot build she uploaded to the internet -- the (now infamous) Toothbrush Helmet.

"So my toothbrush helmet is recommended by zero out of 10 dentists, but it did completely change my life," Giertz said. "Because I finished making this toothbrush helmet three years ago and after I finished making it, I went into my living room and I put up a camera, and I filmed a seven-second clip of it working. And by now, this is a pretty standard modern-day fairy tale of girl posting on the internet, the internet takes the girl by storm, thousands of men voyage into the comment sections to ask for her hand in marriage."

"So my toothbrush helmet is recommended by zero out of 10 dentists, but it did completely change my life."

However, the clever inventor decided against marriage, she told the TED audience.

"She ignores all of them, starts a YouTube channel and keeps on building robots. Since then, I've carved out this little niche for myself on the internet as an inventor of useless machines, because as we all know, the easiest way to be at the top of your field is to choose a very small field."

Giertz owned up to her lack of engineering degrees or any technical engineering training. Everything she's acquired since starting her channel (and even prior) was self-taught. She said she was incredibly ambitious as a child -- almost to a fault. She even referenced sending her brother an email about her crippling embarrassment after getting a B on a math test.

"I got interested in building robots and I wanted to teach myself about hardware but building things with hardware especially if you’re teaching yourself is something that’s really difficult to do," she said. "It has a high likelihood of failure and moreover it has a high likelihood of making you feel stupid. And that was my biggest fear at the time so I came up with a setup that would guarantee success a hundred percent of the time. With my setup it would be nearly impossible to fail and that was that. Instead of trying to succeed I was going to try to build things that would fail."

Giertz's TED Talk comes just a few weeks after the Swedish inventor announced to her over 1.13 million YouTube subscribers that she has a benign brain tumor. In that emotional video, Giertz told her followers that the tumor would require extensive surgeries. Despite the bad news, she still continued with her bad jokes.

"Curve ball from life!," she said. "Everything still feels pretty surreal, but I'm getting through it. Queue jokes about shitty brain surgery robots." 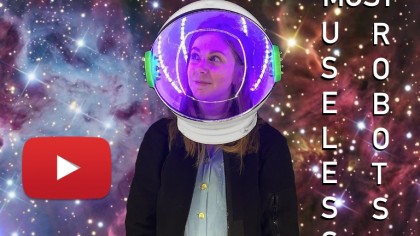 "So as much as my machines can seem like simple engineering slapstick,I realize that I stumbled on something bigger than that," she said.

It's this expression of joy and humility that often gets lost in engineering, and for me it was a way to learn about hardware without having my performance anxiety get in the way. I often get asked if I think I'm ever going to build something useful, and maybe someday I will. But the way I see it, because I've built myself this job and it's something that I could never have planned for."

13+ Books That Should Be On Every Engineer's "Must Read" List

Masterful Lego Creations You Have to See to Believe