On the third anniversary of her passing we take a look at some of the architect's most memorable projects.

Zaha Hadid will go down in history as one of the greatest architects and designers in history. Dubbed “The Queen of the Curve”, Hadid utilized unconventional and circular forms throughout her designs, creating some of the most recognizable products, buildings, and fashion that the world has ever seen.

SEE ALSO: REMEMBERING THE QUEEN OF THE CURVE ZAHA HADID

You may not know the architect, but you are sure to have come across her work. Born in 1950 and passing away in March 2016, Ms. Hadid's studio still remains, launching countless products that are still true to her design philosophy. Marking the 3rd year to the month, since her passing, it only makes sense to take the time to revisit some of her work. 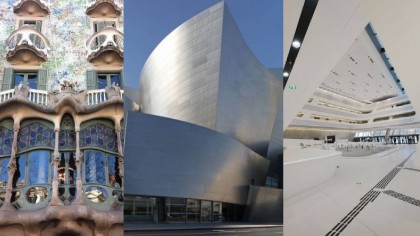 11 Important Architects You Should Definitely Know About

As mentioned above, the rockstar architect's work extended far beyond just buildings. Evidently, the Pritzker Prize winner joined forces with some of the biggest names in fashion and art creating memorable products that are just as important to her legacy as her futuristic buildings.

Today you are not only going to journey through some of her liberating architectural geometry, fluid forms and organic structures found in her buildings but projects she pursued outside the realm of construction. From jewelry to buildings, here are some of Zaha Hadid’s most interesting designs.

Zaha Hadid’s ability to take a product that may go underappreciated on a daily basis and elevate it to functional art is something that is unprecedented. Ms. Hadid completed many furniture products during her career; however, her B&B Italia: Moon System is one of her most memorable.

The boomerang-shaped sofa curves in such a manner that it looks as if it was carved out of a single block of material. Allegedly very comfortable, Hadid integrated a crescent-shaped pouf that can be elegantly be attached and detached from the couch.

Ms. Hadid once described this building as an amalgamation of various design points that have appeared throughout her career. The science center does, in fact, look like a futuristic cathedral dedicated to science with its raised concrete cones, triangular points, and fractured planes.

The 2006 collaboration between Zaha Hadid and Louis Vuitton was the ultimate collaboration sparking both excitement and intrigue across the world of fashion as well as architecture. The French fashion house asked Ms. Hadid to reinterpret the LV renowned Bucket Bag.

What was eventually created was a bag that doubled as a sculpture and as a functional couture fashion piece. The Hadid unique design made it a welcomed addition to the fashion house’s legendary list of collaborative products.

You have definitely seen this building come across your timelines a couple of times. Creating the illusion that the building itself is organically grown from the ground, the 619,000-square-foot cultural center won the London Design Museum award in 2014. Costing a whopping $250 million, the project houses a museum, an auditorium, and a multi-purpose hall.

Fashion and Zaha Hadid just makes sense. The best fashion designers are sculptors on some level, while Ms. Hadid’s work centered around creating organic sculptures. The eco-friendly Brazilian label joined forces in 2008 to create shoes as you have never seen before. The futuristic shoes look like something out of a Ridley Scott film.

You may be noticing a trend here. Ms. Hadid’s work has this unspoken futuristic aesthetic that carries its way through almost everything she touched. The Galaxy Soho building was no exception.

One of the most attainable projects on this list, the Adidas, Pharrell Williams, and Zaha Hadid collaboration added a new dimension to the growing success to the emergence of the Adidas Superstar sneakers. The sneakers themselves features graphic patterns inspired by Hadid’s designs.

Described by Hadid herself, “Like pebbles in a stream smoothed by erosion”, the opera house resembles a stone protruding from the ground, blending in perfectly with the local riverside setting. Large flowing glass welcomes lighting into the massive opera house. The Guangzhou opera house is regarded as one of the most alluring opera houses ever built.

As one of Hadid’s first completed bridges, the project takes its inspiration from the waterway beneath, staying true to the architect’s ability to take design cues from the nature around her. The bridge includes 280 meters of fiberglass reinforced concrete across the river Ebro.

Though this may resemble something out of a prominent gallery, the Serralunga: Flow is a functional planter created by the architect. Massive in size the planter is available in either a  1 or 2 meter-high versions. The planters are made of a linear low-density polyethylene that is 100-percent recyclable after use.

There are still many more Zaha Hadid projects out there, what are some of your favorites?