Do you think you know a lot about weather? Do you know what a 'rain bomb' is? Storm chaser Bryan Snyder was taking some time-lapse video of a storm over Tuscon, Arizona when he caught an incredibly rare meteorological phenomenon on camera. In the video, it appears that a giant mass of water suddenly plummets to the ground. Technically named a 'microburst' this phenomenon usually appears when a column of cool air sinks through heavy storm clouds. Check out the amazing event below.

Microbursts, or 'rain bombs' can produce winds of over 150 miles per hour, not to mention torrential downpours. This weather event that you probably have never heard of before can cause quite a bit of danger to aircraft due to wind shear forces. The burst in the above video was fairly short, but the high winds associated with the event can last upwards of a few minutes, often ripping trees from the ground.

If you have never heard of this phenomenon, don't feel too bad, as it usually only affects the Midwest United States. Microbursts can be dry or wet, and the one in the video was wet due to the increase in localized precipitation in the area. Dry microbursts occur under the same circumstances, but without the presence of precipitation. Microbursts are generally common when a dry adiabatic lapse rate is present, meaning, when the temperature change in the atmosphere is 9.8 °C per kilometer. This high lapse rate means that as the column of air falls, it gains more speed due to the increasing temperature differential. If you want to become a little more versed in all of the complex equations surrounding microbursts, check out information about adiabatic lapse rate here, and information about microbursts here. 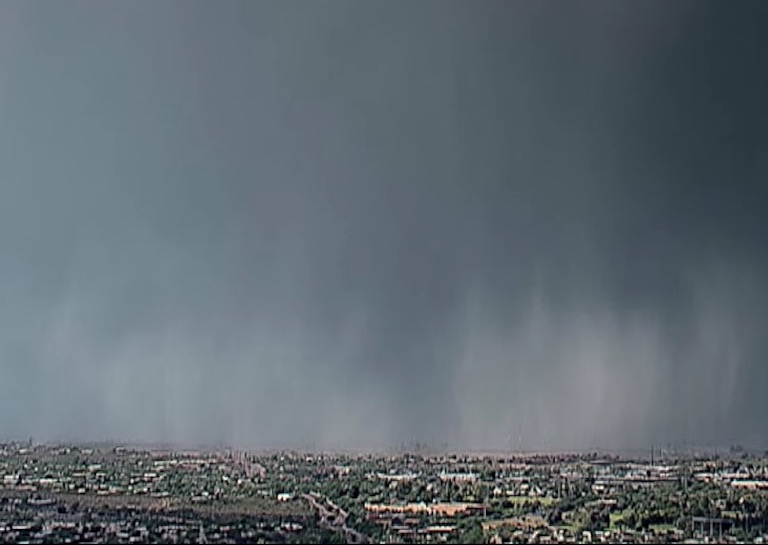 For those of you not interested in meteorology or science or math, then you probably just came for the words 'rain bomb.' I know that's how we first stumbled across this phenomena. Science is awesome whether you understand all of it or not, but I find beginning to grasp the math and science behind something as cool as this only makes it cooler.