A woman presented to her doctor with arm pain. A series of X-rays revealed she was suffering a rare disease that causes her bones to disappear.

Gorham-Stout disease is a rare and crippling disease in which a patient's bones literally disappear. An otherwise healthy 44-year old woman presented to her GP with ongoing pain in her shoulder and arm.

Initial X-rays revealed what may have been a tumor, but was found to be non-cancerous. When the pain refused to go away, a second round of X-rays were completed which revealed a strange outcome.

The woman's arm bones were literally disappearing before the doctor's eyes.

This woman suffers from Gorham-Stout disease which is causing her bone tissue to be replaced by blood vessel growths.

Little is known about this very rare disease and the causes of it have not been identified. What doctors do know is that sufferers of the condition have excessive growth in their blood and lymphatic vessels.

These abnormal growths infiltrate bones which causes the bone structure to break down. Non-cancerous fibrous tissue then replaces the depleted bone.

The condition can be life-threatening

The condition is usually experienced in just one part of the body, such as arm or shoulder. But when located in the neck or spine the condition can cause paralysis or lead to early death.

The severity of the disease ranges from patient to patient, sometimes only affecting a small isolated part of the bone and not elsewhere in the body. Common areas where the disease affects is in the ribs, spine, pelvis, skull, collarbone, and jaw.

There is no known cure for the disease with therapy usually aimed at treating individual patients' specific symptoms. This may range from pain relief to invasive surgery to removing the affected bone area. 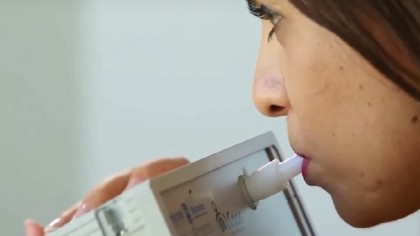 This Breathalyzer can Diagnose 17 Different Diseases in an Exhale

Radiation is also a common treatment for the disease although medical research continues into determining the best treatment options. There have even been instances where the condition has stabilized or retreated without medical intervention.

"Ultimately, this is a challenging disease where evidence-based management remains lacking," the researchers of the new report concluded. The Genetic and Rare Diseases Information (GARD) Center suggests there are only 64-200 reported cases of the diseases with almost all of them occurring in patients under the age of 40.

GARD provides detailed information on a range of rare and genetic diseases in both English and Spanish. It lists diseases with information about prognosis and symptoms as well as offering resources for sufferers to locate specialists in their area.

It is estimated that there are approximately 7,000 rare diseases. It is also estimated that 25-30 million Americans live with a rare disease. This statistic is powerful as it shows that while many diseases are rare the total number of sufferers is very large.

How to Lovingly Restore an Old and Rare Draughtsman's Lamp

Rare UK Meteorite Dates Back to the Beginning of the Solar System, 4.5 Billion Years Ago