An asteroid first discovered last year has now been confirmed to be one of only four equal mass binary systems ever detected near Earth.

An asteroid first discovered in December of last year has now been revealed to be a unique system featuring two objects locked in a dance around their own binary orbit.

The news was announced by NASA after observations from three of the world‘s largest radio telescopes confirmed the planetary object's true distinct nature as one of only four of its kind ever seen.

"Near-Earth asteroid 2017 YE5 was discovered with observations provided by the Morocco Oukaimeden Sky Survey on Dec. 21, 2017, but no details about the asteroid's physical properties were known until the end of June. This is only the fourth "equal mass" binary near-Earth asteroid ever detected, consisting of two objects nearly identical in size, orbiting each other," read NASA's statement.

The new images produced by the telescopes are the most detailed ever of this type of binary asteroid and indicate that its two components are each about 3,000 feet (900 meters) in size. The confirmed sizes are larger than initial brightness observations speculated indicating the objects are not reflective and could, therefore, be as dark as charcoal.

In addition, each object was found to reflect the radar signal differently pointing to a potential difference in either surface compositions or roughness, or even densities. This may indicate that the binary asteroid was actually originally two separate objects that were drawn into a mutual orbit when in close proximity.

Current observations were made possible when 2017 YE5 came to within 3.7 million miles (6 million kilometers) of Earth on June 21. The first images were taken by NASA's Goldstone Solar System Radar (GSSR) in California and already hinted at the possibility that 2017 YE5 could be a binary system.

Scientists at the Arecibo Observatory in Puerto Rico then teamed up with the Green Bank Observatory (GBO) in West Virginia to perform a bi-static radar configuration in order to confirm whether 2017 YE5 indeed consisted of two separate objects. Eventually, all telescopes were in agreement regarding the asteroid's true binary nature.

A rare and unique discovery

The discovery is a very unique one in the field. It is estimated that among asteroids larger than 650 feet (200 meters) found near Earth only 15% are binaries "with one larger object and a much smaller satellite." 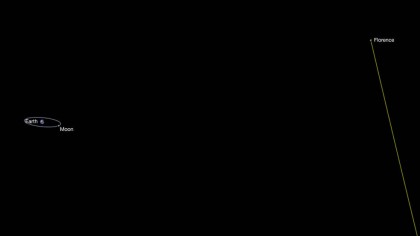 Furthermore, equal-mass binaries featuring two objects of similar size in contact, such as 2017 YE5, are even rarer making up another 15% of large near-Earth asteroids. These last types of systems are referred to as contact binaries.

"The discovery of the binary nature of 2017 YE5 provides scientists with an important opportunity to improve understanding of different types of binaries and to study the formation mechanisms between binaries and contact binaries, which may be related. Analysis of the combined radar and optical observations may allow scientists to estimate the densities of the 2017 YE5 objects, which will improve understanding of their composition and internal structure, and of how they formed," concluded NASA.