A new study may upend current theories about how the formation of heavy metals like gold and platinum in stars occur.

Scientists believe they have identified the process that gave the universe nearly all of its heavy elements like gold and platinum: a rare form of supernova called collapsars.

New Model Upends Existing Theory About the Origin of Gold, Platinum, and Other Heavy Metals

In a paper published this week in the journal Nature, researchers at the University of Guelph (UG) and Columbia University (CU) have proposed a new theory about the origins of the heavier elements in the universe like gold and platinum, saying that a rare type of supernova--a collapsar--is responsible for the vast majority of it. According to the new research, as much as 80% of the heavier elements--in this case, elements heavier than iron, the element after which normal fusion reactions in active stars cannot continue--are produced in an overlooked kind of supernovae called collapsars, which occur in stars with a weight of about 30 solar masses.

These stars are massive enough that after fusing all of their hydrogen and helium into carbon, oxygen, silicon, and even iron, they collapse under the enormous weight of these heavier elements, allowing the creation of even heavier elements like gold, platinum, and others which isn't normally possible within the active star. The subsequent supernova of these stars, loaded up with especially heavy elements, discharges its elements into the universe.

It has long been thought that these heavy elements were produced exclusively in the collision of neutron stars with other neutron stars, or with black holes, distributing the elements contained in these monstrously-dense objects in the process.

Daniel Siegel, professor of physics at UG, along with two colleagues from CU, hadn't even set out to demonstrate that collapsars were the heavy element foundries of the universe. Initially, they were examining the 2017 merger of two neutron stars when their simulation started pointing the team to these underappreciated supernovae as an enormous wellspring of these especially heavy elements.

These very-rare supernovae occur even less seldom than the collision of neutron stars with each other or with black holes, but according to Siegel, what they lack in frequency they more than make up for in volume of heavy elements expelled by the supernova.

"Eighty percent of these heavy elements we see should come from collapsars. Collapsars are fairly rare in occurrences of supernovae, even more rare than neutron star mergers -- but the amount of material that they eject into space is much higher than that from neutron star mergers," he said. 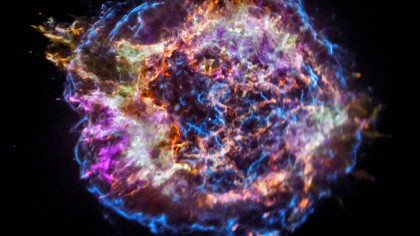 The researchers now hope that they can observe this phenomenon directly to validate the theory. The launch of the James Webb Space Telescope in 2021 will hopefully be a key development, as the infrared instruments onboard should be able to identify the predicted radiation signature of these heavy elements in collapsars in distant galaxies. The work is vital to understanding how galaxies form, filling in important, unknown details about the genesis of the very building blocks of the building blocks of galaxies--the stars, solar systems, nebula, and the like.

"What's fascinating and surprising is that, after 150 years of studying the fundamental building blocks of nature, we still don't quite understand how the universe creates a big fraction of the elements in the periodic table," Siegel said.

Could Metal-Binding Proteins Have Been the Origin of Life on Earth?