Peggy Whitson and two other scientists from the ISS returned safely back to Earth on Sept. 2. In total, the three researchers have over four years of experience in space.

Three space researchers made it back to earth yesterday (Sept. 2) after successful stints aboard the International Space Station. The landing in Kazakhstan marked the end of a record-breaking mission for American astronaut Peggy Whitson.

Whitson spent 288 days aboard the International Space Station. Her trip makes her the most time spent in space by any American -- a total of 665 days. That's almost two years without toilets that properly flush or really good food. She also managed to become the only female to ever serve that long in space. Whitson, a biochemist, broke that record when she hit her 534th day in space.

638 days in space and the view is still amazing! Soaking up some sunset time in the cupola… pic.twitter.com/AiReQzkjJZ

Other notable records? At 57 years old, Whitson is the world's oldest female astronaut. She's also the most experienced female spacewalker; she completed 10 space walks. She ranks amongst the highest spacewalking times ever. She's also the first woman to ever serve as commander of the ISS not once but twice.

Russian cosmonaut Fyodor Yuchikhin and fellow astronaut Jack Fischer also made the descent back to earth with Whitson. Fischer and Yurchikhin served on the Expedition 51/52 crew. Both men arrived in April. Whitson, however, started her time with Expedition 50/51 in November.

During his career, Yurchikhin clocked in slightly more time than Whitson at 673 days. The two are numbers 7 and 8 respectively on the all-time 'endurance' list. Fischer currently stands at 136 days in space.

Before returning back, station commander Randy Bresnik noted that the ISS would lose the knowledge of people who collectively spent over four years in space.

"We are in your debt for the supreme dedication that you guys have to the human mission of exploration," Bresnik said according to the Associated Press. He even called Whitson the "American space ninja" and wished them all Godspeed in their return to Earth.

Originally, Whitson was supposed to depart in June. However, she wished to stay the additional three months in order to complete more research. The only other person who spent longer on a single space mission was astronaut Scott Kelly, and he spent a full year in orbit.

In order to descend to earth, the three scientists entered into the Soyuz MS-04 pod. The crew had a relatively short 3-hour and 24-minute ride down to Earth. 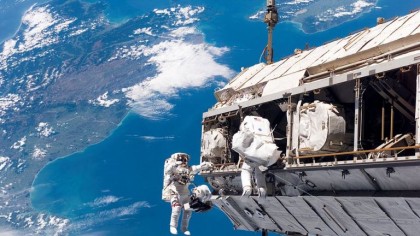 Due to Hurricane Harvey and the devastation in Texas, NASA had to ground its flights to Kazakhstan to get Fischer and Whitson. The European Space Agency is taking the two Americans back to Germany. NASA will collect the two and return them to Houston shortly.

Whitson told news outlets that she's ready for pizza, a working toilet, and to see her husband. Her husband, Clarence Sams, also works at the Johnson Space Center as a fellow biochemist.

A hearty welcome back to those three outstanding researchers! The next set of space explorers will join the ISS following a lift off from Kazakhstan on September 12.