Founded by two surfers, the 4Ocean organization is funding their clean-up and shark conservation causes by selling 100% recycled bracelets.

Millions of metric tons of marine trash pollute the oceans and coastlines each year, which greatly puts marine life in danger and destroys the balance of the oceanic ecosystem. In order to take action, two surfers founded the 4Ocean organization which aims to clean up the polluted oceans and coastlines around the world. The organization is funding their clean-up and shark conservation causes by selling 100% recycled bracelets.

Cleaning up the oceans and coastlines one bracelet at a time

Each year an estimated 80 million metric ton of plastic penetrates the ocean, which contributes to around 60% to 80% of the annual marine debris that pollutes coastlines and oceans. Approximately 80% of the marine trash that ends up in the ocean originates from land and the other 20% are contributed by seagoing vessels. Numerous occasional ocean clean-up drives around the world work to help reduce this alarming marine trash that litter coastlines and oceans. But one particular organization made it their life-long mission to nurture the oceans by reaching out to local and global communities.

"We will create a sustainable future for the ocean by actively cleaning our oceans and coastlines through local clean-ups and global efforts", says the 4Ocean organization.

4Ocean was founded by two surfers who began to clean oceans by themselves only at the beginning of this year. After campaigning for their cause, the founders, along with volunteers and their employees, have so far removed 90,574 pounds of marine trash from 7 different countries. To date, 4Ocean is in possession of 5 ocean clean up vessels that operate throughout the week to carry out offshore cleaning routines. The organization also conducts coastline clean ups, which is where most of the pollution is concentrated. Currently, the organization is made up of 34 staff and full-time captains that routinely conduct the clean-up missions.

4Ocean is currently funding their cause through the recycled bracelets for sale on their website. The 4Ocean bracelets are made from 100% recycled materials. The beads are produced from recycled glass bottles and the cord is made from recycled plastic water bottles. 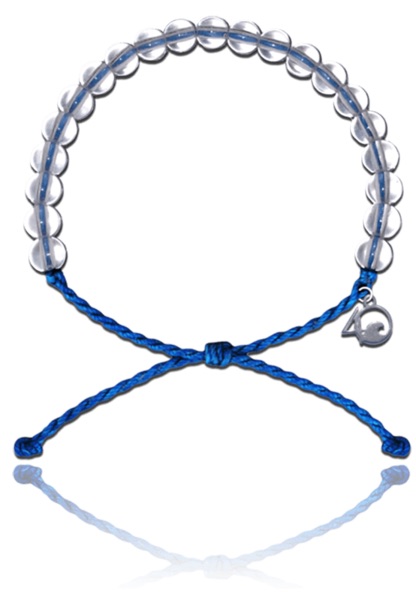 Anyone and everyone can help 4Ocean's mission to clean up oceans and coastlines by purchasing one of the recycled bracelets. Each bracelet helps remove 1 pound of marine trash, which greatly supports the organization and expands the reach of their cause. They are also working with various other ocean-inclined organizations to multiply the workforce.

As well as ocean and coastline clean ups, the organization has also recently launched the shark conservation initiative. According to 4Ocean, almost 100 million sharks are killed every year, which greatly affects the ecosystem as sharks play a vital role in keeping the ocean balanced. There are also shark conservation bracelets available through their website that are used to fund shark-saving missions across the globe.

All of the 4Ocean bracelets are available for only $20 in different colors that represent either the clean-up or shark conservation initiatives.

The complicated truth about plastic recycling. Is it a myth?