Someone on Reddit just created an easy to read map of ALL the Apollo Lunar Landings.

A Reddit user called Famas Liberty recently posted a map showing every single Apollo moon landing in history. The points on the map are according to the coordinates of each landing, something he said, took some time.

“I know there already several of this kind online, but I wanted to do my own “mapping” of all the manned Apollo Landings. I also added the insignia for each mission, the year, and the landing zone’s name.
It was a challenge to pinpoint the exact spots, especially since NASA's map is with inverted colors,” he wrote on the thread.

The map he mentioned, is a more complicated version of Famas Liberty’s infographic. Probably the most curious aspect of this map is the landing site distances among the Apollo crafts.

Another commenter discovered a list of landing site distances, seen below.

The Apollo landings have garnered a great deal of doubt and conspiracy theories over the decades since Neil Armstrong became the first human to set foot on the moon. Some believe that the Apollo 11 landing was faked due to the American flag, seemingly flapping as if in a breeze in the videos and photos taken from the wind free lunar surface. Experts have since debunked these hypotheses, offering up explanations.

Regarding the flag, "the video you see where the flag's moving is because the astronaut just placed it there, and the inertia from when they let go kept it moving," said spaceflight historian Roger Launius, of the Smithsonian's National Air and Space Museum in Washington D.C told National Geographic News. 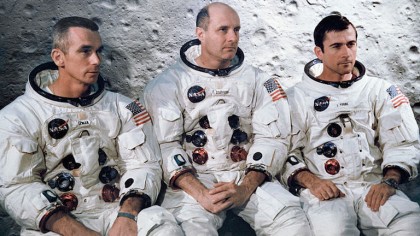 For those not sure about the validity of the Apollo 15 mission, a Japanese probe had photographic evidence proving them wrong. In 2008 the Japanese craft took pictures of the lunar terrain and compared them to the images taken in July 1971. They discovered that the photos were an exact match.

There is enough information out there favoring the reality of these extraordinary missions, but perhaps humankind needs to make another trip to the moon to really prove the naysayers wrong. China is next up for a moon landing, aiming to put a man on the moon by 2036.