Reducing air pollution is paramount for building the sustainable cities of the future. These five cities are using technology to reduce the harmful effects of polluted air.

According to the World Health Organization (WHO), climate change could potentially increase the number of deaths from air pollution by hundreds of thousands between 2030 and 2050. The global air pollution problem extends to the majority of countries around the world.

Studies have consistently estimated that 95 percent of the global population is breathing dirty and harmful air. Air pollution also causes a decline in human intelligence and an increased risk of global diabetes. In order to fight this global risk, cities around the world are taking a step forward using technology and smart city initiatives to reduce air pollution. 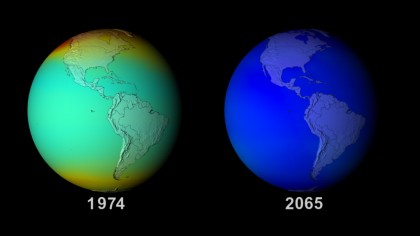 The information is then used by local governments to reduce pollution by reducing traffic and output from factories. Predictive IoT is applied in areas such as disease control, weather and natural disaster management, and traffic optimization in smart cities.

Smart Cities Council has identified five cities that are using technology to reduce the harmful effects of polluted air:

1. Hamburg has adopted a smart city initiative with a focus on cleaning up its ports

Ships burn marine fuels in order to generate power while in port. Unfortunately, this is unhealthy for the air quality of the city.

Hamburg is an important and busy port in Germany, a popular destination for cruise liners. Government officials have been wanting to reduce both the air and noise pollution from ships in the harbor.

Adopting Siharbor shore connection from Siemens, now it is possible for the ships to turn off the generators while in port and draw power from the mainland. A smart city solution that is helping Hamburg toward a clean port future.

The Scottish city of Glasgow has been using Sensing the City pilot project for a more efficient and economical way to monitor air quality and reduce emissions.

The project is a collaboration with the University of Strathclyde Institute for Future Cities and the industry-led Center for Sensor and Imaging Systems (CENSIS).

The two systems complement each other. Low-cost systems' advantage is in flexibility and rapid mobile configurations whereas the static stations provide highly accurate data. The problem with the high-cost solution is the limitation in the quantity of deployments due to, precisely, the cost.

The two solutions working together provide indicative IoT air-quality data in areas of low or no coverage and support identification of pollution sources.

Driving more than 400 miles of streets in West Oakland and parts of East Oakland at least 30 times on 50 separate days the Google cars can assure an adequate sample size.

The mapping exercise found that pollution levels varied between and within neighborhoods. Differences were noted even within only one block apart.

People who live near industrial operations or high-traffic corridors were breathing several times the amount of toxins as their neighbors who were just a block away.

The study was conducted in collaboration with the Environmental Defense Fund and sensor technology provider Aclima. The results obtained provided loud and clear data evidence of air pollution which residents can use to argue against further industrialization of polluted neighborhoods.

The Chinese capital has tried some fascinating and out of the ordinary approaches to fight the dense cloud of smog that hovers overhead the population.

The smog particles are compressed and used to make things like cufflinks and rings. The idea behind this is to engage the population with the project.

The Smog-Free Tower was designed by Dutch artist and innovator Daan Roosegaarde. The artist has some more green projects under his sleeve. In 2017, he was working with a Chinese company on a smog-sucking bicycle. Adding thousands of electric buses is another way that Beijing is using to reduce air pollution. Each new electric bus part of the project would eliminate about 45 tons of carbon dioxide emissions annually.

Both the LES and AQAP aim to tackle emissions from road transport and improve air quality to contribute to a reduction in CO2 emissions. The plan aims at making Greater Manchester carbon neutral by at least 2040.

The U.K. government plans on banning all new diesel and gas cars from roadways by 2040 with half of the vehicles being hybrid or electric by 2030. The Road to Zero initiative is a move to encourage people on the adoption of electric and hybrid vehicles toward the goal of clean air cities.

Smart Cities initiatives don't stop in one region only. They extend around the world. Sidewalk Labs, an infrastructure company, has announced plans to create a high-tech neighborhood in Toronto, Quayside combining the best in urban design with the latest in digital technology.

Meanwhile, in the U.S., Bill Gates has invested $80 million towards smart city development of Belmont in Arizona. The plans include the adoption of autonomous vehicles and a sophisticated data hub.

Far EasTone, a telecommunications company based in Taiwan, together with the Government of Taiwan plan on providing accurate air pollution forecasts, achieved by AI-assisted algorithms populated with mobile data, information from remote air quality sensors, and localized weather data.

The Smart Cities Council of Australia and New Zealand has produced a Smart Cities Guide for Built Environment Consultants that defines and sets out the important functions of a smart city. The guide includes a checklist for collaboration across the sector. A resource to access smart city awareness, technology, and related strategy.