Regenerating Energy from the Rails 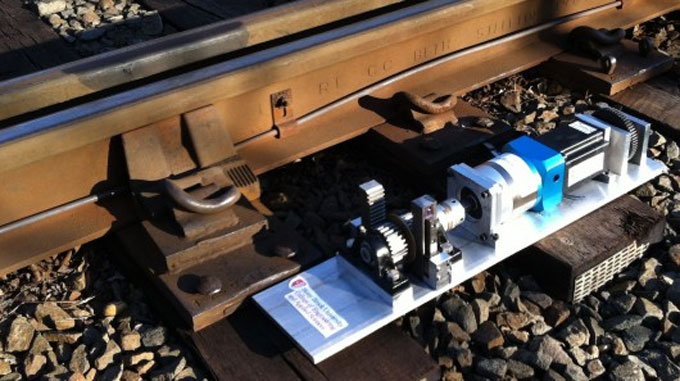 The modern world is starving for energy which drives many scientists to widen the search of energy sources, including and unusual ones. Lei Zuo from the Department of Mechanical Engineering at Stony Brook University discovered some sort of unusual energy source while traveling on a train. Then he noticed that vibrations on the rails could be transformed into mechanical energy. And into electricity, respectively.

https://www.youtube.com/watch?v=fCqBeFL5D38
Later Mr.Zuo constructed a device that is able to transform rail vibes into electricity. The device consists of a rack pinion, generator and mechanical rectifier that transforms bidirectional movement into one-directional. On the video below this energy convertor powers successfully a regular PC fan.
Lots of these generators installed along a railroad may re-generate energy sufficient for many other devices. Lei Zou's device has a conversion efficiency of 70% and is capable of generating roughly 250 watts depending on the level of vibrations.
Some calculations show that if the state of New York utilize this invention, the state could save up to $10 million. Viewed on a larger scale, US has more than 150 000 miles (240 000 km) of railroads which suggests a potential of saving saving tens of millions of dollars. And it will have positive ecological effect by reducing the harmful emissions.