Spending $200 million a year, over a five year period, Renault-Nissan-Mitsubishi will be investing in technology that will preserve a sustainable automotive future.

Within the excitement of CES, Renault-Nissan-Mitsubishi announced the creation of a venture capital fund. Through Alliance Ventures, the world's leading automotive alliance plans to support "open innovation" over next five years by committing $200 million a year or $1 billion in investments. 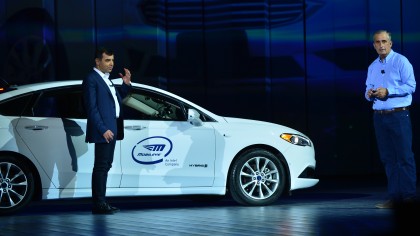 Big Bets On Autonomous Vehicles: Intel Will Use 2 Million Cars to Map the World's Roads

Carlos Ghosn, Chairman, and CEO of the R-N-M Alliance enthusiastically shared his vision for the venture at CES stating, "We want to make sure we are being challenged," says Ghosn, "the alliance is designed to be a one-stop shop to talk about ideas." Guided by this same collaborative spirit, the alliance will focus on putting their resources into entrepreneurs focused on new mobility, including autonomous automotive systems, connectivity, and of course artificial intelligence.

With a set amount of resources put into place, the VC firm will become the largest venture capital fund across the automotive industry. The announcement at CES is part of the larger five-year plan to push the automotive industry forward. "Our open innovation approach will allow us to invest and collaborate with start-up companies and technology entrepreneurs, who will benefit from the global scale of the Alliance," says the CEO, "This new fund reflects the collaborative spirit and entrepreneurial mindset at the heart of the Alliance."

As the fund grows along with the number of strategic investments, Alliance Ventures will operate as an incubation center for partnerships, automotive entrepreneurs as well as the perfect place for the supergroup to begin creating more partnerships. Some of the areas of interest for Renault-Nissan-Mitsubishi VC will include the development of electric cars, autonomous drive, and robot taxis.

The first deal for the venture capital group has already been put into motion. The first deal will be a strategic investment in the company Ionic Materials; an organization based in the state of Massachusetts who is the developer of a pioneering solid polymer electrolyte that enables improved performance and cost-effectiveness of high-energy density batteries for automotive and multiple other applications.

By investing in companies like Ionic, not only does the team hope to fund the growth of these startups but also share in the innovative technologies and ideas that these companies have to offer. As stated at the CES event, "First we are looking at startups, that are bringing a service that is unique with a big focus on technology and mobility services as well as a big focus on generating a strong ROI."

Following the announcement of the VC, Alliance will also be committing $8.5 billion to yearly research and development. Renault-Nissan-Mitsubishi has big plans for the next five years with the aim to release over 40 different cars as well as 12 pure electric models.