A team of Paleoanthropologist at the University of California, Davis theorise that the simplistic cave drawings produced by Neanderthals served a purpose for improving their hunting skills.

The work of anthropologists at the University of California, Davis is helping to change ideas surrounding Neanderthals, regarded by scientists as our closest extinct relative.

Professor Emeritus Richard Coss put forth a theory in a 2015 study arguing that although Neanderthals possessed large brains as well as the ability to make complex tools, they were still only able to produce relatively simplistic cave drawings.

The theory is being reconsidered by Cross, who writes about the causal link between ancient man’s behavior and hunting patterns existing at the time: “Since the act of drawing enhances observational skills, perhaps these drawings were useful for conceptualizing hunts, evaluating game attentiveness, selecting vulnerable body areas as targets, and fostering group cohesiveness via spiritual ceremonies.”

“Neanderthals could mentally visualize previously seen animals from working memory, but they were unable to translate those mental images effectively into the coordinated hand-movement patterns required for drawing,” according to Coss.

What this means is that the cave walls served as an important function for encoding memories for Neanderthals, however simplistic the drawings may have been. These drawings, ultimately, became one of the tools used to sustain their hunting practices.

The core of the argument put forward by Dr. Coss is that Neanderthals were able to use their memory in a very sophisticated, dynamic way, to use the illustrations to help construct a better understanding of the world around them. Seen through this lens related to memory, it could mean, ironically, that thanks to the advent of devices like smartphones as well as other portable devices, the power of our memories may have faded on the whole.

In one study, titled “Smartphones and Cognition: A Review of Research Exploring the Links between Mobile Technology Habits and Cognitive Functioning”, published in the Frontiers in Psychology journal on April 25, 2017, the co-authors examine the “tangible effects of mobile media devices on memory and knowledge”, citing the impact of the “Google Effect”, which is also appropriately referred to as “digital amnesia”, a phenomenon by which people tend to forget some information more easily if they know that it can be easily accessed through various digital platforms or search engines. They concluded that this effect “can make us less inclined to encode and store that information in long-term memory”. 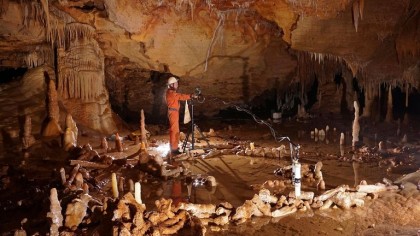 The common thread seems to be, however, that in both the Neanderthal and modern contexts we use visual data for encoding information for long-term or short-term memory purposes. The methods may have changed, but what remains evident is that human ingenuity always leads to a solution. The most important function of these studies, it could be argued, is to disrupt the narrative behind the evolution of man, as well as the various skills associated with each stage. There is a non-linear and dynamic process that explains the evolutionary path that began with Neanderthals. The work of these anthropologists represents one step towards filling in the gaps.