The Egyptian mummy was long believed to contain a bird, but detailed micro-CT scans have uncovered the truth.

A tiny mummy preserved at the Maidstone Museum in the UK since 1925 was believed to contain a large bird and was designated ‘EA 493 – Mummified Hawk Ptolemaic Period’. However, a recent examination led by a mummy expert Andrew Nelson from Western University, Canada, revealed that the remains inside the tiny mummy were of a premature male human fetus.

The mummy was provided to the museum by a private collector. In 2016, the museum decided to CT-scan one of the female mummy along with other animal mummies including the EA 493.

This is when the experts identified the smaller mummy as a human fetus. However, the CT scans were lacking enough details, which led Nelson to conduct micro CT-scans in collaboration with Nikon Metrology (UK).

The high-resolution micro CT-scans on the mummy revealed that the remains are of a stillborn baby of 23 to 28 weeks old. The scans provided in-depth details, which showed that the corpse wrapped inside was suffering from anencephaly – a rare congenital disorder in which a baby is born with underdeveloped brain and skull.

The images of the scans showed well-developed toes and fingers, but the skull was severely underdeveloped. “The whole top part of his skull isn’t formed. The arches of the vertebrae of his spine haven’t closed. His earbones are at the back of his head” said Nelson, a bioarchaeologist, and professor of anthropology at Western University, Canada. “In this individual, this part of the vault never formed and there probably was no real brain.”

Anencephaly is still prevalent today and affects about 3 pregnancies in every 10,000 in the United States each year. The causes of this rare disorder are still unknown but are believed to be caused due to changes in the genes or chromosomes of babies.

Nelson and his team believe that the mother of the stillborn did not receive proper nutrition. Unfortunately, there is no known cure or treatment for the disorder and almost all babies born with anencephaly will die shortly after birth.

The team also hypothesize that the stillborn was likely a candidate for religious offering to gods and could have been an individual with special powers. "It would have been a tragic moment for the family to lose their infant and to give birth to a very strange-looking fetus, not a normal-looking fetus at all," Nelson said. "So this was a very special individual."

With this finding, the tiny mummy is the second confirmed case of an Egyptian mummy with Anencephaly. The first one was described in 1826 by the French zoologist Etienne Geoffroy Saint Hilaire, which according to Nelson was found "in a deposit of baboon votive mummies." 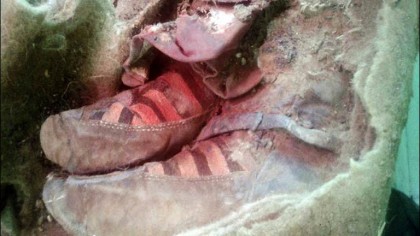 The findings of this research were recently presented by Nelson at the Extraordinary World Congress on Mummy Studies in the Canary Islands. Nelson remarked that these findings provide information related to the causes of Anencephaly and also raises questions about the possibility of a belief that such fetuses were having special powers and were hence mummified.

This 17-Year-Old Has Created the Ultimate Coronavirus Crisis Website