A group of scientists are eager to recreate some of the most iconic holographic images in the sci-fi world. They will bring to life this idea with volumetric images.

One of the most iconic scenes from the vastly popular Star Wars series occurs in episode IV, A New Hope. Early in the film, for the hero's call to action, the beloved R2-D2 presented a message of a distressed Princess Leia through a floating hologram to a young Luke Skywalker and aging Obi Kenobi. 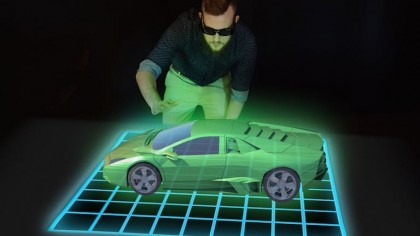 The floating hologram intrigued audiences around the world. Holograms and their multiple variations have appeared in films for the past decades. Whether a hologram is used for communication or design, scientists have been eager to recreate the same sci-fi inspired technology.

Recently groups of researchers have wanted to not only create a hologram, but push the technology forward, creating 3D images that float in thin air.

Daniel Smalley, BYU holography expert, computer engineering professor, and electrical engineer wants to create the same 3D image seen in Star Wars.  Discussed in their paper published in Nature, Smalley talks about the details and goals of his research. In his description of the project, he wants people to understand that the image of Princess Leia is not technically a hologram. It is a 3D image or volumetric image, that floats allowing onlookers to walk around the image and see it from every angle.

Simplified by coauthor Erich Nygaard states, “In simple terms, we’re using a laser beam to trap a particle, and then we can steer the laser beam around to move the particle and create the image.”

The best way to think of the process used in the lab is to view the display like a 3D printer for light. “You’re actually printing an object in space with these little particles," states Smalley. Overall the Optical Trap Display is able to produce geometries that are currently unobtainable with holographic and light field technologies.

What do you think of volumetric images?