Researchers from Delft University have discovered a way to use electric currents to transform atmospheric carbon into other carbon structures. This includes ethanol, a vital part of drinking alcohol.

The alcohol industry rakes in billions of dollars worldwide each year. In the United States alone, it makes up $475 billion in economic activity. Your favorite alcoholic beverage -- whether it be beer, wine, bourbon, or scotch -- takes time and meticulous planning to create. But what would happen if you could literally create alcohol out of thin air? Researchers from the Netherlands might have been able to do just that.

PhD student Ming Ma and a team from the Delft University of Technology discovered a way to take air pollution and convert it ethanol, methanol, and any other forms of carbon-based materials needed. Ma's doctoral project did not start off as a way to save money on alcohol. It started as a way to repurpose dangerous levels of atmospheric carbon dioxide that are contributing to climate change.

A trending topic amongst emissions engineers is carbon capture

Carbon capture requires technology to extract carbon emissions from places like coal power plants. One of the most popular ways is through carbon capture and storage (CCS). CCS puts atmospheric carbon into the ground where it joins the rock bed over time. It's already been put into practice by several companies. In 2008, a German power plant tested out the technological feasibility and efficiency of the process. By applying CCS to the Schwarze Pumpe plant, 80 to 90 percent fewer emissions escaped into the atmosphere compared to the plant prior to CCS.

Ma developed a way to convert the carbon used in CCU into other kinds of molecules. The team does this through a process of electroreduction. As the name implies, the process applies electric current to carbon dioxide in order to convert it to another substance. Ma's thesis talks about how different metals can be used to create different chemical results. Copper wiring, for example, produces hydrocarbons from CO2.

Ma's thesis discusses how changing these metals, their lengths, and exposures to the currents can theoretically tune any reaction into any carbon-based product desired. 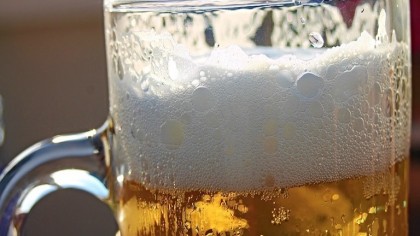 Ma's PhD thesis is currently under peer review. However, the research hints at relatively untapped potentials with CCU to produce a variety of chemicals. In addition to ethanol (the substance that plays a crucial role in the alcohol we drink), the process can also be used to make methanol or even formic acid. The process could have huge potential in fuel production. It would, in essence, create carbon-neutral fuels -- a dream for environmental engineers.

Ma works with the Smith Lab for Solar Energy Conversion and Storage and TU Delft. Given that Ma's thesis earns peer approval, the next steps for the team include finding ways to improve the selectivity of single products. They also have to figure out a way to scale up the entire project.

The Smith Lab received an ERC Grant to "improve our understanding of the complicated reaction mechanisms in order to gain better control fo the CO2 electrocatalytic process."