While it might not look like much, this cloaking device alters waves around underwater objects to 'cloak' them from sound waves.

By  Shelby Rogers
May 13, 2018
Peter Kerrian/Acoustical Society of America via EurekAlert!

A team of researchers from Penn State University have managed to create a metamaterial that could become a new form of cloaking device. While it's not quite the cloaking technology fans of Star Trek are familiar with, it's still an impressive and functional innovation.

The success of the device all depended on the team's ability to create a metamaterial -- synthetic composite materials that exhibit properties not typically found in natural materials. Some metamaterials are the darkest pigments in the world. Others exhibit anti-magnetic properties. The unique metamaterial developed by the team needed to accomplish something distinct from other metamaterials.

"These materials sound like a totally abstract concept, but the math is showing us that these properties are possible."

The Penn State team was led by professor Amanda Hanford, and they set out to engineer a metamaterial that could divert sound waves from an object by obscuring the physical waves around it. Effectively, this new metamaterial would be the first of its kind to bend sound underwater rather than obscure light.

"These materials sound like a totally abstract concept, but the math is showing us that these properties are possible," Hanford said. "So, we are working to open the floodgates to see what we can create with these materials."

In order to test the material, the team created a 3-foot-tall pyramid form perforated steel plates. Then they put that structure on the bottom of a research tank. The tank held a source hydrophone that produced acoustic waves anywhere between 7,000 Hz and 12,000 Hz. There were also several receiver hydrophones throughout the tank that monitored the reflected acoustic waves.

The engineering team recently presented their work at the 175th Meeting of the Acoustical Society of America in Minneapolis, Minnesota.

This isn't Penn State's first time creating unique cloaking devices. In November, another team of engineers created nanoscale holes that could absorb light and become an antireflective coating. This team was led by Tak-Sing Wong, an assistant professor of mechanical engineering. Rather than science fiction inspirations, Wong looked to nature for ideas -- namely the leafhopper insect and its ability to successfully hide itself in plain sight. 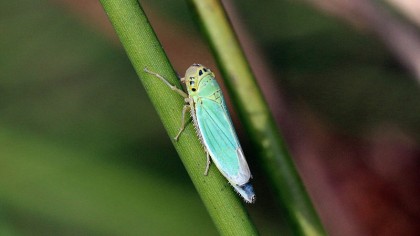 The leafhopper uses microparticles called brochosomes to cover its wings and blend it into the background.

"This paper is more of a fundamental study," Wong said. "In the future, we may try to extend the structure to longer wavelengths. If we made the structure a little larger, could it absorb longer electromagnetic waves such as mid-infrared and open up further applications in sensing and energy harvesting?"