Materials engineers discovered a simple way to remove fibers from wood and condense its structures to make the wood stronger.

By  Shelby Rogers
February 09, 2018
University of Maryland via Science Daily

A new way to treat wood could transform a seemingly 'ordinary' organic material into a super-strong resource. Engineers from the University of Maryland developed a process that makes the treated wood 12 times stronger than natural wood and 10 times tougher. The researchers also believe it's comparable -- if not stronger than -- many titanium alloys, and it's a significantly cheaper resource.

Liangbing Hu of UMD's engineering school led the team and the research published in the most recent edition of Nature. Hu also serves as an associate professor of materials science and engineering, and is also a member of the Maryland Energy Innovation Institute.

"This could be a competitor to steel or even titanium alloys, it is so strong and durable. It's also comparable to carbon fiber, but much less expensive," Hu said.

But how tough is it? In order to test the wood, the team shot fake bullets at it to see how it withstood a hit. The projectile passed through the natural wood, but the treated wood stopped the bullet before it could break through.

In order to create such strength in the material, the researchers compressed the fibers by removing particular polymers within traditionally softer woods. Rather than attempt to radically transform the wood's chemical composition, however, the team used relatively simple methods. They boiled different types of wood like oak in a sodium hydroxide and sodium sulfite solution for over 7 hours. That solution kept the cellulose intact but gave more space to the wood's porous structure.

The team then took that wood and pressed it at 100 degrees celsius for an entire day. The resulting plank of wood was 20 percent thinner but three times as dense as the starting plank. Before this study, most other projects testing similar theories only resulted in strengths of three or four times stronger. The wood from the UMD study was nearly 12 times stronger than the original wood.

"It is as strong as steel, but six times lighter. It takes 10 times more energy to fracture than natural wood. It can even be bent and molded at the beginning of the process."

"It is both strong and tough, which is a combination not usually found in nature," said Teng Li, the co-leader of the team and Samuel P. Langley Associate Professor of mechanical engineering at UMD's Clark School. His team measured the dense wood's mechanical properties. "It is as strong as steel, but six times lighter. It takes 10 times more energy to fracture than natural wood. It can even be bent and molded at the beginning of the process."

Hu mentioned that not only is the process cheaper than developing newer materials or even redesigning expensive, older materials, it also has the potential to be better for the environment.

"Soft woods like pine or balsa, which grow fast and are more environmentally friendly, could replace slower-growing but denser woods like teak in furniture or buildings," Hu said. 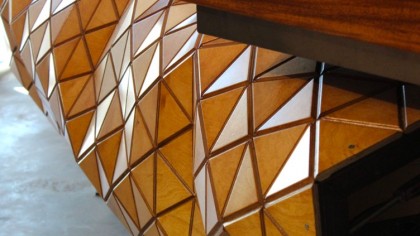 The work of the team has already garnered national and international attention from other materials engineers. Orlando Rojas is a professor at Aalto University in Finland. He called the project "outstanding" in its ability to maximize the mechanical performance of the wood itself.

"Too little or too much removal lower the strength compared to a maximum value achieved at intermediate or partial lignin removal," Rojas said. "This reveals the subtle balance between hydrogen bonding and the adhesion imparted by such polyphenolic compound. Moreover, of outstanding interest, is the fact that that wood densification leads to both, increased strength and toughness, two properties that usually offset each other."

Via: University of Maryland