Science fiction is getting closer to reality. Scientists have created a liquid metal that can be stretched and pulled in all direction like something from a Terminator film. A paper detailing the breakthrough has been published in the Applied Materials & Interfaces journal along with a video outlining the bizarre material.

SEE ALSO: FIVE OF THE MOST INTERESTING MOVIES ABOUT TRANSHUMANISM

The Super shiny silver metal is able to be twisted and pulled using magnets, and it can even be used to close a circuit.

The American Chemical Society has explained the research that was completed by scientists at the Beihang University in China, "They added iron particles to a droplet of a gallium, indium and tin alloy immersed in hydrochloric acid," the ACS reports.

"A gallium oxide layer formed on the droplet surface, which lowered the surface tension of the liquid metal."

This allows it to stretch out and move without breaking apart. There are many metals that have are liquid at room temperature such as gallium and certain alloys. These low temperature melting metals have interesting properties such as high conductivity and the ability to be highly manipulated.

These unique properties make them excellent for use in soft robotics and electronics. By adding magnetic particles to these metals, they can also be easily manipulated by magnets.

But because these metals also have high surface tension they can often only be manipulated on a horizontal plane and must be completely submerged in a liquid to stop the liquid turning into a dry paste during movement.

The researchers from Beihang University in China including Liang Hu, Jing Liu wanted to create a liquid metal that could overcome these restraints. They managed to achieve their goal by working with the metal when it was submerged in liquid. 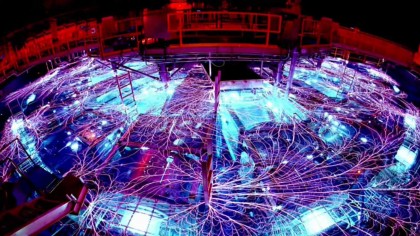 Iron particles were added to a droplet of a gallium, indium and tin alloy immersed in hydrochloric acid. This cause a gallium oxide layer to form on the droplet surface, which in turn lowered the surface tension of the liquid metal. At this point the researchers applied two magnets to the metal and managed to manipulate its shape, pulling it in two directions at once.

Using this method they could stretch the droplet to almost four times its resting length. The liquid metal also proved its conductive power by lighting up an LED bulb when it was connected to a simple circuit.

The extraordinary material could even move vertically and horizontally to connect two electrodes the upper one exposed to the air and the lower one submerged in hydrochloric acid.

This proved the metal didn’t need to be fully submerged to still maintain its unique properties. The research opens up new possibilities to the design and implementation of soft robots and flexible electronics.