This low-cost technology paves the way to provide an access to safe drinking water for the deprived among all of us.

Remember the science textbooks full of experiments which made use of the process of evaporation for the purification of water. This idea of using the sun’s energy to evaporate and purify water has been in use since the ancient times.

Scientists at the University of Buffalo are now giving this technique a modern-day makeover so that it can be used to purify water at record-breaking rates. The low-cost technology developed by the scientists is believed to provide near-perfect purification efficiency.

According to Qiaoqiang Gan, the main purpose of the technique is to generate water appropriate for drinking, at a speed which is much quicker than using the natural light. Gan happens to be the lead researcher, Ph.D., associate professor at the University of Buffalo.

As explained by Gan, when solar energy is used in order to evaporate water, some of this energy is not utilized as planned. The reason is believed to be the wastage in the form of heat lost to the surroundings.

As a result, 100 percent efficiency is not achieved. The new technique has the abilities to draw heat from the surrounding environment, thus it is capable of achieving near-perfect efficiency.

This new purification technique comprises of draping a sheet of carbon-dipped paper in an upside-down "V” shape. The bottom edges of the paper soak in the water and the coating of carbon serves to absorb solar energy, thereby transforming it to heat.

This aids in the evaporation of water. Thus sunlight is being used to produce clean water with almost optimal efficiency.

The paper sloped technology used in this technique keeps the carbon-dipped paper cool by preventing it from the direct fall of sunlight. This results in drawing heat from the surroundings while compensating for the loss of solar energy during of vaporization process.

With this setting, Gan and his team were able to evaporate 2.2 liters of water per hour for every square meter of an area illuminated by the regular sun compared to 1.68 liters, which is the actual theoretical upper limit.

This technology is economical as well as efficient to provide drinking water in areas with scanty resources or those affected by natural calamities. “When you talk to government officials or nonprofits working in disaster zones, they want to know: ‘How much water can you generate every day?’ We have a strategy to boost daily performance,” said Haomin Song, co-author of the study and electrical engineering Ph.D. graduate. “With a solar still the size of a mini fridge, we estimate that we can generate 10 to 20 liters of clean water every single day.”

The advancements of the technology are described in detail in a study published in the Journal of Advanced Science. 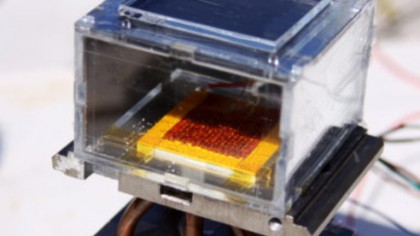 Gan and his colleagues have established a startup, Sunny Clean Water, in order to provide visibility to the invention and bring it to those who actually need it. The company is in the process of integrating this new system into a model of a solar still, which is a water purifier powered by the sun.

“Importantly, this is the only example I know of where the thermal efficiency of the solar evaporation process is 100 percent when you consider solar energy input. By developing a technique where the vapor is below ambient temperature, we create new research possibilities for exploring alternatives to high-temperature steam generation,” Gan said.