Researchers with Columbia University partnered with the University of North Carolina to create a small patch covered in microneedles. Those small needles carry a medication that can turn hard-to-remove white fat into metabolism-boosting brown fat.

By  Shelby Rogers
Sep 20, 2017
A closer look at the microneedles covering the new fat-melting patch Columbia Medicine via YouTube

Losing fat remains an elusive goal for millions around the world. Dieters and gym goers look to target that one little lump of extra jiggle, often finding disappointment. However, researchers at Columbia University in New York City created a skin patch that can dissolve areas of excess fat.

The Columbia University team partnered with the University of North Carolina to create a tool that could one day fight against diabetes and even obesity.

There are two key types of fat cells: white cells and brown cells. Brown cells are the 'healthier' of the two. They have smaller droplets and a high count of mitochondria, hence they can burn fat and produce heat. 'Baby fat' is largely made up of brown fat which cushions the new bones and organs of an infant. It also keeps babies warm against exposure to its surroundings. However, by adulthood, that brown fat gets replaced with dreaded white fat cells.

White fat cells are used for long-term energy storage. They're the cells to which people dedicate New Year's Resolutions. The human body clings to those white fat cells, especially during periods of caloric deficit (aka dieting) which is why it can be so easy to gain fat immediately after getting off a diet. Those white fat cells grabbed the attention of the research team.

Currently, treatments exist to transform the white cells into brown cells. However, those treatments aren't the easiest to administer.

"There are several clinically available drugs that promote browning, but all must be given as pills or injections," said study co-leader Li Qiang, PhD, assistant professor of pathology and cell biology at CUMC. "This exposes the whole body to the drugs, which can lead to side effects such as stomach upset, weight gain, and bone fractures. Our skin patch appears to alleviate these complications by delivering most drugs directly to fat tissue."

The skin patch is covered with tiny needles. The drugs that will be put into the needles are encased in nanoparticles. Those nanoparticle-laden drugs are loaded into the 1 cm square patch. Each patch has dozens of microscopic needles. Placing the patch on the skin is painless and slowly releases the drug into the skin tissue. That slow and steady process is exactly how the team planned it, according to study co-leader and biomedical engineering professor Zhen Gu.

"The nanoparticles were designed to effectively hold the drug and then gradually collapse, releasing it into nearby tissue in a sustained way instead of spreading the drug throughout the body quickly," he said.

The team tested the patches on obese mice. Each mouse got two patches -- one containing the drug-containing nanoparticles and another without the drug. Control mice received two empty patches. Researchers put new patches on the mice every three days for a total of four weeks.

Mice with either the nanoparticles had a 20 percent fat reduction on their treated sides when compared to the untreated sides. They also had lower fasting blood glucose levels than the control mice. 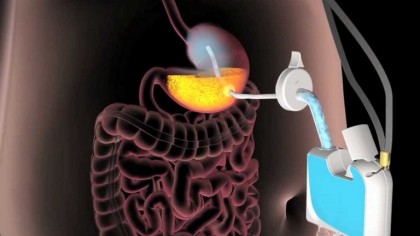 The researchers also analyzed the genes of the mice's sides. They found that the treated side had more genetic similarities to brown fat than the untreated sides.

"Many people will no doubt be excited to learn that we may be able to offer a noninvasive alternative to liposuction for reducing love handles," Qiang said. "What's much more important is that our patch may provide a safe and effective means of treating obesity and related metabolic disorders such as diabetes."