A new study reveals some impressive advancement in the efficiency of perovskite-based solar cells.

Perovskite solar cells have been gaining attention lately as their energy efficiency starts reaching that of silicon cells and with good reason!

These cells are simple and cheap to produce and have a high level of flexibility that would lend themselves to a variety of applications. The problem, however, has been getting them to last for more than a couple of months.

SEE ALSO: SOLAR CELLS THAT COULD GENERATE ENERGY FROM RAIN

"Perovskite solar cells offer a lot of potential advantages because they are extremely lightweight and can be made with flexible plastic substrates," said Juan-Pablo Correa-Baena, an assistant professor in the Georgia Tech School of Materials Science and Engineering. "To be able to compete in the marketplace with silicon-based solar cells, however, they need to be more efficient."

The novel research has been focused on the process of adding alkali metals to the perovskites to increase performance. "We knew from earlier work that adding cesium and rubidium to a mixed bromine and iodine lead perovskite leads to better stability and higher performance," Correa-Baena said. 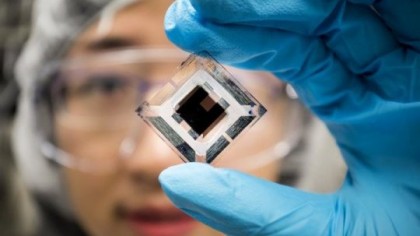 What was missing was the knowledge of why adding those alkali metals had that effect on perovskites. So, the researchers decided to examine the perovskites at the nanoscale using high-intensity X-ray mapping.

"By looking at the composition within the perovskite material, we can see how each individual element plays a role in improving the performance of the device," said Yanqi (Grace) Luo, a nanoengineering PhD student at UC San Diego.

But that was not all. Further analysis also found that perovskite cells were surprisingly robust despite the presence of "dead zones." Dead zones are caused when halide metals remain clustered resulting in some inactive zones where no current is possible.

"This was surprising," Fenning said. "Having these dead zones would typically kill a solar cell. In other materials, they act like black holes that suck in electrons from other regions and never let them go, so you lose current and voltage.

"But in these perovskites, we saw that the dead zones around rubidium and cesium weren't too detrimental to solar cell performance, though there was some current loss," Fenning said. "This shows how robust these materials are but also that there's even more opportunity for improvement."

Although the research is still at its early stages, the findings could one day lead to advancements that could see perovskite cells become viable options. And the researchers are very excited about the applications these cells could have as well as the environmental benefits they could produce.

"These materials promise to be very cost effective and high performing, which is pretty much what we need to make sure photovoltaic panels are deployed widely," Correa-Baena said. "We want to try to offset issues of climate change, so the idea is to have photovoltaic cells that are as cheap as possible."

Researchers Have Developed a New Kind of 'Unbreakable' Glass