Making great headway in the area of flexible organic semiconductors development, a team of researchers have come up with a new optoelectronic device that shows great promise.

A team of researchers based at Scotland’s University of St. Andrews have spent many months developing a laser sticker that may simulate the closest thing to possessing super powers. The work was carried out at the university’s Organic Semiconductor Center, which brings together some of the best minds in the areas of physics and chemistry to “make lightweight flexible optoelectronic devices”. Their work covers three broad areas: solar cells, displays, and most relevant, lasers. 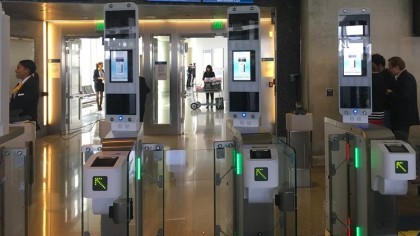 Lufthansa Pushes to Roll Out Biometric Boarding Passes Across the U.S.

Their research involved the development of ultra-thin and bendable lasers that are applied directly to the surface of the eyes via contact lenses. The result is another stranger than fiction moment: short and readable pulses of laser light being emitted from the eyes.

They were designed to act as a two-fold security measure, both as a general anti-counterfeiting measure as well as a general means of beefing up biometric security tactics, the latter of which is by many indications a reality that will enter almost every facet of security sooner than we think. Moreover, optoelectronics seems to offer a more foolproof security guarantee than the at times flawed technology of voice recognition.

Findings from the research appear in a study, titled “Flexible and ultra-lightweight polymer membrane lasers”, which was published on May 1st in the Nature journal.

The team had set out to create an organic semiconductor which showed a greater range of flexibility compared to others that had been developed in the past, and furthermore “demonstrate [its] integration on contact lenses as wearable security tags.” Weighing in at less than 0.5 gm−2 and with a thickness of just under 500 nm, the wearable seems to have achieved these objectives.

The researchers’ overall aim is to be part of the wave of flexible optoelectronics and its growing use in the field of wearable security. They discuss this in the paper, also elaborating on the number of possible future uses of the technology:

The team also highlighted in the paper the laser’s use on banknotes as a possible application, “where the unique lasing spectrum is readily read out and used a security feature”.

The figure below outlines the various stages involved in the entire process of transferring and securing the tiny stickers from start to finish, as well as showing the scale of the lasers with its application to a human thumbnail.

Paper co-author and University of Saint Andrews Professor Ifor Samuel discussed the impact of the laser: “By floating a thin plastic film off a substrate we have made some of the world's smallest and lightest lasers and put them on contact lenses and bank notes.

These are the type of research and development efforts which produce results that have direct significance in the real world, as the reality of retinal scans moves into the area of normalization. Teams like those at the Organic Semiconductor Centre are laying valuable groundwork for will become tomorrow’s more sophisticated security network.