Researchers Develop Flying Microlaser That Travels via an Optical Fiber

A team of researchers from the Max Planck Institute for the Science of Light have created a flying microlaser that optically traps particles.

A team of researchers has developed a flying microlaser (although unintentional, the name in itself seems a rather effective buzz-generating technique) that both optically traps as well as propels lasing microparticles through a hollow tube. 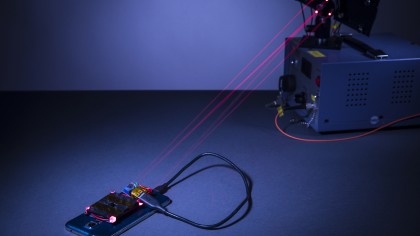 The water-filled tube that is part of the particle-based laser allows the accurate measurement of subtle changes in temperature. And in the round of experiments conducted, temperature changes as little as 3 degrees could be detected by the sensors.

The team was able to achieve these results by heating two specific parts of the tube to a temperature of 22 degrees Celsius above room temperature while propelling the microparticle.

As the laser light moves throughout the tube, light reflects the various changes in temperature. The effect: a kind of micro-heat seeking missile laser.

The researchers reported that the average speed of the particles ranged between 100 and 250 microns or micrometers ( 100 and 250 μm/s.). With one micron representing one-millionth of a millimeter, the scale of the delicate work performed by the team seems truly staggering.

Details of the experiment were shared in a paper, titled “Flying particle microlaser and temperature sensor in hollow-core photonic crystal fiber”. The paper will be published in the April 1st edition of The Optical Society (OSA) journal Optic Letters.

The team’s work has been an evolving process, with their goal to develop the hollow-core photonic crystal fiber, the glass tube which allows them to control and manipulate the light to produce the results witnessed in their experiments:

“For quite some time, our research group has been developing the technology necessary to optically trap particles inside hollow-core photonic crystal fibers,” shared Shangran Xie, who was part of the research team, adding, “In this new work, we were able to apply this technology not just to trap a particle but also to induce it to act as a laser that can be used for sensing over long distances in a fiber.”

Paper co-author Richard Zeltner of the Germany-based Max Planck Institute for the Science of Light, was unrestrained in discussing the broad-ranging long-term impact of the study:

“The flying microlaser could potentially be used to deliver light inside the body.”

This means that the microlaser could have applications in a number of medical disciplines. “By inserting a fiber into the skin, a microlaser emitting at a suitable wavelength could deliver precisely positioned light for use with light-activated drugs. The concept could also be applied in optofluidic lab-on-a-chip devices to provide a light source for various bioanalysis techniques or for on-chip temperature measurements with high spatial resolution,” Zeltner added.

Although the team acknowledges that tweaks to the design will need to be made in order to make the fibers ready for a larger audience—the main area to work out is to adjust the gain materials to achieve more consistent and longer-lasting results—the foundation has already been laid, according to a statement by Zeltner.

“With the increasing commercialization of hollow-core photonic crystal fibers, all the technology we need to turn this system into a practical sensor is already available.”

Via: Optical Society of America