A new technology has resulted in the creation of hydrophobic coatings that are ecologically friendly and tougher than anything witnessed before.

Recent environmental protection laws have seen a gradual phase-out of many chemicals used in producing water-proofing material. Now, a study published in the journal Advanced Functional Materials by a team of MIT researchers has revealed the introduction of a new safer nontoxic coating that is even more effective than its banned conventional competitors.

“Most fabrics that say ‘water-repellent’ are actually water-resistant,” said MIT professor of mechanical engineering and study co-author Kripa Varanasi in a statement. “If you’re standing out in the rain, eventually water will get through.” Ultimately, “the goal is to be repellent — to have the drops just bounce back.”

Traditionally, water repellency has been achieved by coating surface textures with substances consisting of perfluorinated side‐chains polymers. These long polymers have been identified by the EPA as having many health and environmental hazards as well as accumulating in both the planet and human body tissue.

Shorter-chain polymers were found to be safer alternatives in many studies but, up to date, were never able to perform as effectively as their larger dangerous counterparts. To overcome this issue, Varanasi's team cleverly enhanced shorter-chain polymers' hydrophobic capacity through extra chemical processing and then combined the upgraded compounds with a new coating process developed to avoid traditional clogging issues.

“The biggest challenge was finding the sweet spot where performance, durability, and iCVD compatibility could work together and deliver the best performance,” said former MIT postdoc and study co-author Dan Soto. The team then subjected fabrics treated with this new coating to a barrage of lab tests. 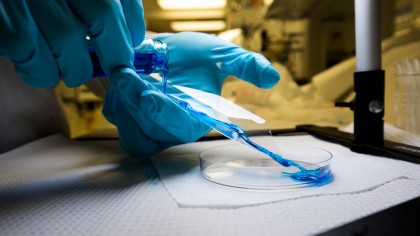 This New Coating Can Protect Electronics and Surfaces From Every Liquid

Aside from industry standard rain tests, the coated fabrics were exposed to liquids including coffee, ketchup, sodium hydroxide, and various of damaging acids and bases. Impressively, the protected materials successfully repelled them all.

In addition, the study found that the treated fabrics' water repellency was not diminished by repeated washings or severe abrasion tests even after a grueling 10,000 set of repetitions. Only extreme abrasion was able to damage the fabrics but, surprisingly, not the coatings.

The process is compatible with a variety of fabrics such as cotton, nylon, and linen. Furthermore, iCDV proved effective even on non-fabric materials such as paper, opening the door to a new range of applications.

“Many fabrics can benefit from this technology. There’s a lot of potential here," concluded Varanasi.

The technology is now patent-pending and the team hopes to one day license it to private companies. MIT's Deshpande Center for Technological Innovation supported the research.

Researchers Have Developed a New Kind of 'Unbreakable' Glass