A new artificially organic stingray created by a team of researchers is redefining what constitutes a living organism. The small stingray is controlled and powered by light-activated cells taken from a rat's heart. All anatomical features relative to a real stingray are present on the artificial creature which utilizes a polymer skin to create structure. Cells embed inside the skin are capable of flapping the wings of the stingray, propelling it through the water as well as controlling direction with the artificial stingray tail.

About 200,000 rat cells called cardiomyocytes constitute each artificial creature. This is by far the purest example of a cyborg with seamlessly integrated synthetic structure and biological power. Engineered by an international team of researchers at Harvard, the research developed from the robotic ray is published here.

"Inspired by the relatively simple morphological blueprint provided by batoid fish such as stingrays and skates, we created a biohybrid system that enables an artificial animal—a tissue-engineered ray—to swim and phototactically follow a light cue." ~ Science

The cells are placed in between a neutrally charged gold skeleton which creates a form of communication between each light-sensitive cell, according to Gizmodo. This is then covered by a polymer and formed into the shape you can see in the video below.

Contraction of the cells inside the artificial ray occurs through the exposure to light. This contraction causes the wings to flap downwards. However, in order to achieve the reverse motion of flapping the wings upward, the gold skeleton was designed to act like a spring, storing the downward force and releasing it to return the wing to the up position, according to the BBC.

Perhaps the most innovative system that the team designed was how the biologically synthetic animal can be controlled. Different frequencies of light pulses control the ray's speed and the location of the light indicates travel direction.

"The cardiomyocytes were genetically engineered to respond to light cues, so that the undulatory movements propelling the robot through water would follow a light source." ~ Science 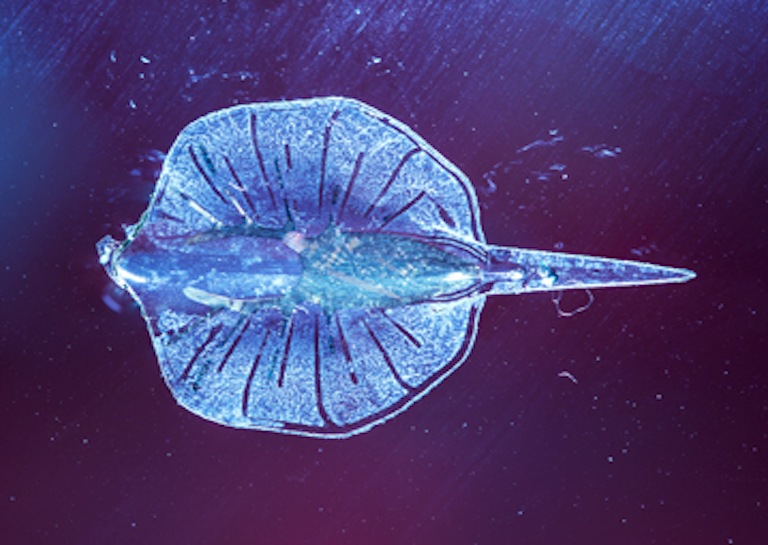 Now that the lines between animal and robot are effectively blurred, what do you think the future of the industry is? Biological cells are used in this instance because they are more efficient at storing and releasing energy than mechanical actuators. Harnessing the power of living cells to control synthetic beings may soon lead to sustainable 'cyborg' robotics.