For ages, there have been spiral rock lined formations called puquio in Peru laid out by the Nasca People, but no one really knew what they were for, until now. A team of researchers led by Rosa Lasaponara with the Institute of Methodologies for Environmental Analysis, suggests that they were actually used as a water collection and distribution system for the ancient civilization. Living from around 1000 B.C. to 750 A.D., these people have an astounding lifespan considering they thrived in one of the driest locations on the planet. A video below (as cheesy as it may be) details the a little more background of the wells.

There has a been a general idea surrounding the puquios that they were used for water collection purposes, but no one has proven this fact until this team of researchers found evidence of ancient canals and pumping systems along the pathways of holes, according to Phys.org.

Part of the struggle that prefaced the conclusive identification of these wells was that they were constructed from the surrounding materials, so carbon dating was impossible. Using satellite imagery, scientists were able to generate a map of where these puquios were in relation to each other, but their purpose has largely been unclear, until now.

Part of what makes this discovery so fascinating is how vastly this hydraulic system expands throughout the region. Not only this, but researchers believe the spiral designs would have drawn air into the canals using the wind to help push the water through the system at higher speeds. This design could possibly be evidence of the world's first hydraulic pumps. A system this complex and expansive makes you wonder what other technologies these civilizations had access to in their time. The puquios network would have required constant maintenance and communication throughout the different groupings of Nasca people. 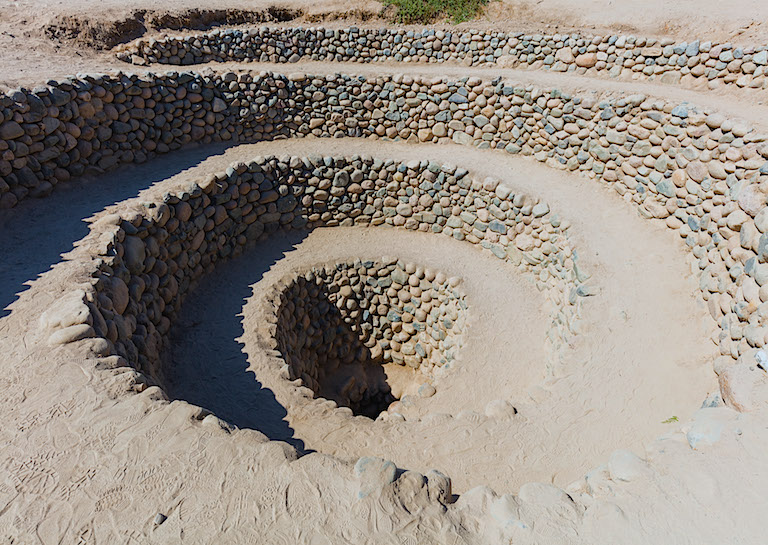 All of this engineering would have allowed the wells and hydraulic system to be in use all year long, supplying water to the Nasca people whenever needed. It goes without saying, but the complexity of the system and the need for extensive maintenance goes to show how technologically advanced these people were. The original construction of these wells was also so sturdy that some of them are still in use today in the surrounding region.

SEE ALSO: The Mysterious Agricultural Terraces Of The Incas

Manmade or natural: Which kind is the world’s deepest underground structure?