The new DNA add on could be incredibly important in further understanding more about the human genetic code.

The new find has been called the "twisted knot" of DNA, and it shows just how complex human DNA is beyond the modern understanding of a double-helix structure.

The study was led by professor Daniel Christ who serves as head of the Antibody Therapeutics lab at the Garvan Institute of Medical Research. According to Christ, this find upends what neary everyone has come to understand about DNA over the last several decades.

The new DNA bit is called the intercalated motif (i-motif) structure. While this particular find was discovered in the 1990s, it's only just now finally been seen in living cells. (Prior to the most recent discovery, eveything else had been observed through in vitro methods.)

“When most of us think of DNA, we think of the double helix,” says Associate Professor Daniel Christ (Head, Antibody Therapeutics Lab, Garvan) who co-led the research. “This new research reminds us that totally different DNA structures exist – and could well be important for our cells.”

“In the knot structure, C letters on the same strand of DNA bind to each other – so this is very different from a double helix, where ‘letters’ on opposite strands recognise each other, and where Cs bind to Gs [guanines].” 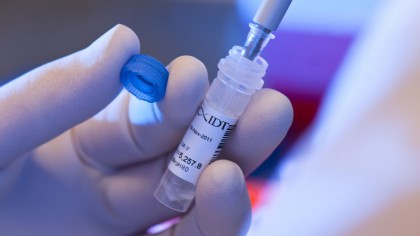 The recent research was published in the most recent edition of the journal Nature Chemistry. Dinger, Christ and the team realized that the new DNA shape looks completely different when compared to the actual structure of the DNA. While the double helix remains DNA most famous shape, it can also exist in other formations -- according to the most recent research.

The researchers theorize that DNA could exist in short stretches in other shapes. This is despite the fact that for decades on end, the DNA double helix has reigned supreme. Scientists like Rosalind Franklin, James Watson and Francis Crick all contributed to the modern understanding of DNA -- one that has significantly changed.

“What excited us most is that we could see the green spots – the i-motifs – appearing and disappearing over time, so we know that they are forming, dissolving and forming again,” said Dr. Mahdi Zeraati, whose research underpins the study’s findings.

The i-motifs themselves happen in 'promoter' regions -- areas where genes are switched on or off in DNA -- and in telomeres (those genetic parts often associated with aging.

Zeraati said, “We think the coming and going of the i-motifs is a clue to what they do. It seems likely that they are there to help switch genes on or off, and to affect whether a gene is actively read or not.”

“We also think the transient nature of the i-motifs explains why they have been so very difficult to track down in cells until now,” added assistant prof Christ.

Assistant Professor Dinger had high hopes for applications of the project.

"It’s exciting to uncover a whole new form of DNA in cells – and these findings will set the stage for a whole new push to understand what this new DNA shape is really for, and whether it will impact on health and disease," Dinger said.

Via: The University of New South Wales