The Smithsonian team said that one of every five fish they've found in this zone has been an entirely new species.

By  Shelby Rogers
Mar 21, 2018
This new fish -- the Aptoclinus Dropi -- got its name from the Smithsonian project which discovered it. Carole Baldwin/Smithsonian via EurekAlert

A southern Caribbean reef is now host to an entirely different ocean-life zone discovered by researchers. A team from the Smithsonian called the new zone the rariphotic, placing it between 130 to 309 meters (400 to 1,000 feet) below the surface.

They also discovered a vibrant ecosystem of fish species never before classified by researchers. The new zone serves as a refuge for shallower reef fishes looking for an escape from the warming waters. However, the Smithsonian team is still trying to pinpoint this new zone's precise role in the larger aquatic ecosystem.

The team set out to study deep-reef ecosystems compared to the declining health of its shallower counterparts. A number of researchers have suggested that these deep-reef systems could be the "coral reef twilight zone" and refuge for shallow-water organisms pushed out of its dying homes.

"It's estimated that 95 percent of the livable space on our planet is in the ocean," said Carole Baldwin, curator of fishes at the Smithsonian's National Museum of Natural History, lead author of the study and director of the Smithsonian's Deep Reef Observation Project (DROP).

"Yet only a fraction of that space has been explored. That's understandable for areas that are thousands of miles offshore and miles deep. But tropical deep reefs are just below popular, highly studied shallow reefs--essentially our own backyards. And tropical deep reefs are not barren landscapes on the deep ocean floor: they are highly diverse ecosystems that warrant further study. We hope that by naming the deep-reef rariphotic zone, we'll draw attention to the need to continue to explore deep reefs."

In total, the study's authors defined the zone after observing 4,500 fish from 71 species during a total of 80 submersive dives. The team noted that most of the fish in the rariphotic zone both look similar to their shallow-reef counterparts as well as show relationship to them. The researchers found that these new species were more closely related to the shallow-reef fish rather than their often-terrifying deep-sea counterparts.

"About one in every five fish we're finding in the rariphotic of the Caribbean is a new species," said D. Ross Robertson, marine biologist at STRI and a co-author of the study. "So far, my favorite is Haptoclinus dropi."

The Haptoclinus dropi (featured in this article's featured image) was actually named after the research program itself -- Deep Reef Observation Project (DROP). That fish is one of the few that have an 'official' name thus far. Many more species still await description post-discovery.

The Smithsonian crew relied on a Curasub mini-submarine for its deeper expeditions, as the craft can transport researchers as deep as 1,000 feet for up to eight hours at normal atmospheric pressure. That technology allowed the team to make more dives as it simplified the transition back to shore. 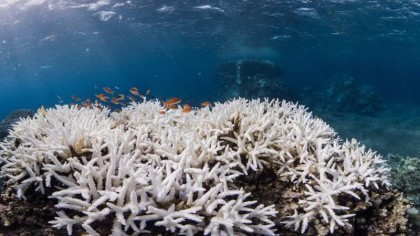 The study offers up a new classification of coral-reef zones, and places the rariphotic (low light) zone between the mesophotic (from 40 to 150 meters) and deep aphotic (no light; below 300 meters).

"Reef ecosystems just below the mesophotic are globally underexplored, and the conventional view based on the few studies that mention them was that mesophotic ecosystems transition directly into those of the deep sea," Baldwin said. "Our study reveals a previously unrecognized zone comprising reef vs. deep-sea fishes that links mesophotic and deep-sea ecosystems."