A team of Californian researchers discovered that the human body makes itself 'high' when it hosts certain parasitic worms.

Getting a parasite is normally the last thing any mammal wants, but a new study could prove being a host comes with an unexpected side effect.

Researchers from the University of California, Riverside (UCR) discovered that some worms have the ability to reduce inflammation and pain in its host. The effect is like that of getting high on marijuana. Ultimately, the research could help identify new ways of killing off parasites with higher rates of success.

Cannabis-like molecules made by the body

The UCR researchers focused heavily on endocannabinoids. Endocannabinoids are cannabis-like molecules that are made by the body. These molecules help regulate things like immune system functions, behavioral attributes, and neural functions.

Much like their similarly named relative, endocannabinoids can also help boost feeding behavior and reduce someone's pain and inflammation. In worms, the body's production of the molecule takes a very interesting response.

"Upon worm infection, the host’s intestines produce these cannabis-like molecules may be as a safety net to dampen pain response,” said Nicholas V. DiPatrizio, an assistant professor of biomedical sciences at the UCR School of Medicine and co-leader of the research project. “What we now have found is that the worms, too, are producing these natural cannabinoids throughout the infection process and especially when the worms penetrate the skin, further dampening the host’s pain response.”

“Until now, no one had investigated endocannabinoids in worm infection,” said immunologist and senior author Meera G. Nair, an assistant professor of biomedical sciences in the UCR School of Medicine, who co-led the research project along with DiPatrizio. “We found that endocannabinoids are elevated following worm infection, and they contribute to optimal worm expulsion from the host’s body.

"This is a protective pathway that operates within infection that we were unaware of before. To increase its chances of survival, the worm may use this pathway so the host increases its feeding behavior — that is, eats more food — and it can also reduce tissue damage that inflammation and pain cause.”

Not all mammals have this skill. However, recent studies show the ability to create endocannabinoids might be aligned with primates.

"What we now have found is that the worms, too, are producing these natural cannabinoids throughout the infection process and especially when the worms penetrate the skin, further dampening the host’s pain response. This is advantageous to the worm because if the host could detect these parasites, it would respond to kill them. It’s a pro-survival signaling pathway in the body that may have a therapeutic advantage in treating worm infection.”

Adler Dillman co-authored the paper and serves as a parasitologist. Dillman noted shock that helminths (i.e. flukes, tapeworms, nematodes) readily produce a cannabis-like molecule in their own bodies.

“We were taken aback by this finding,” said Dillman, an assistant professor in the UCR Department of Nematology. “It may be important in other infections as well. Consider that the endocannabinoid pathway is present in almost all the worms we examined in this study. What it is telling us is that the pathway is evolutionarily conserved across a vast number of species. This clearly is an old and important system in the body that predates humans.” 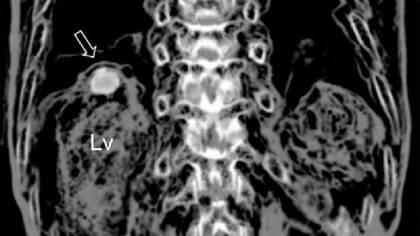 The researchers' aren't just studying the effects of getting "worm highs" for no reason. The team earned a two-year $275,000 grant from the U.S. National Institutes of Health in order to learn more.

“Our current study focused on hookworms; we are ready now to investigate other helminths,” Nair said. “We will investigate whether the host and worm induce endocannabinoids so that the host may have less tissue inflammation and may have improved feeding behavior. Since the worms depletes the host of nutrients, it would make sense that they would trigger strategies to improve feeding.”

The team continues to study this because the worms effectively manipulate the human body (or other mammalian prey that doesn't know it doesn't have a parasite living in it). If a human comfortably lives life unsuspecting that they're carrying a parasitic being, they'll never fight being the host. The researchers want to know more about exactly why and how these parasites have hacked the human body.

“The anti-inflammatory endocannabinoid system gives us insight into potential therapeutic targets for not only hookworm infection, but also celiac disease and inflammatory bowel disease,” said DiPatrizio.

The recent results from the mouse-based study can be found in the journal Infection and Immunity.