The breakthrough could lead to metamaterial devices that work as analog computers that function with light instead of electricity.

Metamaterials are materials engineered to have properties not found in naturally occurring materials. The field involves designing complicated structures, some of which can manipulate electromagnetic waves.

Now, researchers at the University of Pennsylvania's School of Engineering and Applied Science have designed metamaterials that can solve equations.

Referred to as "photonic calculus," the process would work by encoding parameters into the properties of an incoming electromagnetic wave.  The wave would then be sent through a metamaterial device.

Once inside, the device's structure would change the wave in such a way that it would exit encoded with the solution to a pre-set equation.

The researchers demonstrated such a proof-of-concept experiment for the first time with microwaves. But the project can be scaled down to light waves in order to fit on a microchip.

These metamaterial devices would work as analog computers that function with light instead of electricity. As such, they could solve equations much faster than their digital counterparts, while using less power.

"Our device contains a block of dielectric material that has a very specific distribution of air holes," said Engheta, H. Nedwill Ramsey Professor in the Department of Electrical and Systems Engineering. "Our team likes to call it 'Swiss cheese.'" 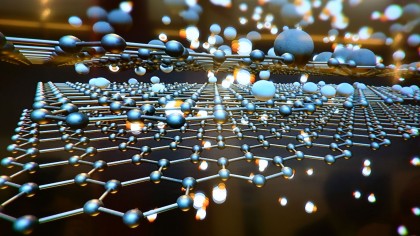 This Swiss cheese device has a pattern of hollow regions that is set up to solve an integral equation with a given "kernel." This kernel refers to the part of the equation that describes the relationship between two variables.

"For example, if you were trying to plan the acoustics of a concert hall, you could write an integral equation where the inputs represent the sources of the sound, such as the position of speakers or instruments, as well as how loudly they play. Other parts of the equation would represent the geometry of the room and the material its walls are made of. Solving that equation would give you the volume at different points in the concert hall," said lab member Brian Edwards.

In this integral equation, the features of the room are represented by the equation's kernel. It is this part of the equation the researchers are able to represent in a physical way, through the arrangement of the Swiss cheese air holes.

"Our system allows you to change the inputs that represent the locations of the sound sources by changing the properties of the wave you send into the system," Engheta said, "but if you want to change the shape of the room, for example, you will have to make a new kernel."

Their device is already showing great promise despite having been constructed with microwaves.

"Even at this proof-of-concept stage, our device is extremely fast compared to electronics," Engheta says. "With microwaves, our analysis has shown that a solution can be obtained in hundreds of nanoseconds, and once we take it to optics, the speed would be in picoseconds."

Solve the 'Open the Lock' Puzzle That Has Internet Puzzled

9 Animals That Can Actually See in UV

A Floating Boat that Can Tackle the High Seas