For many years, we had no answer to the cause of Melorheostosis, but now researchers have solved this mystery.

Melorheostosis is one of the most notorious diseases as the reason for its occurrence was a mystery.  This condition is also known as the “dripping candle wax” bone disease.

It affects human bones and causes the excess formation of bone tissue. The uncontrolled growth forms structures on the bone that resemble melted candle wax on the side of the candle.

Researchers at the National Institutes of Health have now uncovered the cause behind this condition.  They conducted various studies and experiments with 15 patients from different parts of the world.

The aim of the research was simple and precise - to find out the cause of Melorheostosis and effective ways to treat them. There is a chance that you might not have heard of this condition ever before in your life and there is a reason for it.

Melorheostosis is a very rare disease. Only 400 cases were ever registered worldwide, and the research used patients who were not related to each other. However, this condition is very painful, and undulated growth of bones results in restriction of movement.

There were some preconceptions made on this disease as the head of the Clinical and Investigative Orthopedics Surgery Unit at the National Institute of Arthritis and Musculoskeletal and Skin Diseases (NIAMS) at NIH, Timothy Bhattacharyya, M.D. explains “Scientists previously assumed that the genetic mutations responsible for melorheostosis occurred in all cells of a person with the disorder”

The researchers took a different approach. They didn’t go with the already existing data. “Our team hypothesized that mutations might only occur in the affected bone tissue,” Timothy said.

In an average human, the bone density and strength decreases with age.  However, people with Melorheostosis will have the condition reversed. As they get old; their bones will become even harder and denser as layers on bone tissue get overplayed on top of one another. 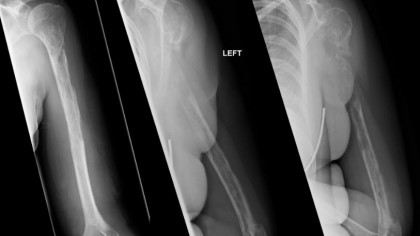 The research saw success when they found out that the uncontrollable growth was a result of the inhibitors getting affected by mutations. To be more precise, the bone growth in humans is a result of the active working of MEK1 protein.

This overproduction of protein leads to excessive bone growth in specific areas of the body.

Co-author of the study Joan Marini, Ph.D., M.D., of NICHD, said, “When we started, we had no preconceived causative pathways, but the participation of the patients has really changed the scientific landscape on this topic. Further studies on how this pathway works in both normal and mutant bone cells may have broad implications that could benefit a wider population.”

“This is an exciting study of a very rare bone disorder that not only identified the responsible mutation in half of the patients but uncovered fundamental information about the role of a cancer-related gene in the metabolic pathways of normal bone.”

With this new finding, doctors, scientist, and researchers covered great lengths in untangling the mysteries of bone healing and bone tissue dynamics.

Via: National Institutes of Health

A Physicist Has Solved How Black Holes Reflect the Universe