Researchers Find New Spiders and Name Them After Obama, Bowie, and More

A team of student researchers discovered 15 new species of spiders once all believed to be part of the same species. They named each spider after someone they felt embodied the values of conservation and upheld biodiversity.

A team of undergrad students with the University of Vermont found 15 new species of "smiley-faced" spiders. These students had the opportunity to name the spiders with names that will last a lifetime, so they took advantage of the opportunity. The team named each spider after modern 'conservation heroes' (most of whom, coincidentally, smile often).

British documentary icon David Attenborough, actor Leonardo DiCaprio, former U.S. President Barack Obama and his wife Michelle are all now immortalized as arachnids. Each student got to name a spider, and a few named them after family members. But as student Lily Sargeant points out, "we all named the Bernie Sanders spider."

"We all have tremendous respect for Bernie. He presents a feeling of hope," said Sargeant, who graduated from UVM last year.

"This was an undergraduate research project," says Ingi Agnarsson, a spider expert, and professor of biology at UVM who led the study. "In naming these spiders, the students and I wanted to honor people who stood up for both human rights and warned about climate change -- leaders and artists who promoted sensible approaches for a better world."

The spiders won't be found anywhere near the residences of their famous counterparts, however. The smiling spiders can be located on Caribbean islands and further south in warmer climates. The area has been a favorite area for researchers as it's one of the most biodiverse in the world. Agnarsson and his team used the opportunity to observe the geographical representation of each species and compare their notes with previous studies. Older research done by leading spider expert Herbert Levi concluded that the spiders in this area were just variations between one species.

"These are cryptic species," Agnarsson said. "As Dr. Levi's work clearly showed, they're hard to tell apart by looking at them."

After DNA testing using a new molecular technique, the team discovered that these smiling spiders were, in fact, different species.

"Thoughts about conservation change dramatically when you go from having a common, widespread species to an endemic on, say, Jamaica that has very specific conservation needs," Agnarsson says.

"All the sudden we have fifteen-fold increase in diversity in this particular group -- just because we did a detailed study," said Agnarsson. "That tells us something about biodiversity in general. The more we look, the more we discover."

And to honor both the biodiversity and conservation, the students named the spiders after leaders who embodied both.

"I'm a second-generation American and I'm black," said Sargeant. "It is through a diversity of perspectives that we achieve innovation in science and I appreciate how much the Obamas value diversity." 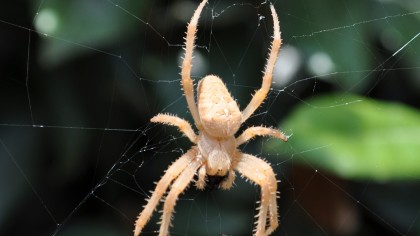 "I'm over my crush, but now that he's involved in environmental issues, I love him even more. So I named a spider after him hoping that if he read our study," said Van Patten, "he might go out to dinner with me and talk about climate change."

Whether it's Bernie or Bowie, Barack or Michelle, the students and Agnarsson took the opportunity to make a statement about the importance of leaders who value conservation.

"Here's the thing," said Agnarsson, "we need to understand and protect biodiversity in its many forms, and we felt compelled to recognize leaders that understand this."

The full study can be found in the September 26 issue of the Zoological Journal of the Linnean Society.