The development is a key step for this water-splitting method that so far was only possible with purified water. Purified water is rare and costly to produce whereas saltwater is one of Earth's most abundant resources.

Theoretically, to power cities and cars, "you need so much hydrogen it is not conceivable to use purified water," said Hongjie Dai, J.G. Jackson and C.J. Wood professor in chemistry at Stanford and co-senior author on the paper. "We barely have enough water for our current needs in California."

The innovation is also environmentally friendly. Hydrogen fuel does not emit any carbon dioxide, only water.

A new take on a simple process

Electrolysis is a simple process to conduct. Use a power source to connect two electrodes placed in water. Turn it on and see hydrogen gas come out of the cathode and oxygen out of the anode. 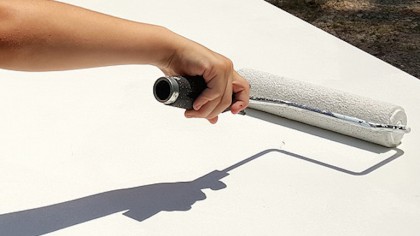 But so far, negatively charged chloride in seawater salt corroded the anode, damaging the system. The researchers ingenuously conceived of a way to coat the anode with layers rich in negative charges.

Once that was done, the layers repelled the chloride, stopping the anode from being decayed. The result is nothing short of impressive.

The system can now function for "thousands of hours" as opposed to the mere 12 hours it lasted without the negatively charged coating.

The researchers were also able to produce up to 10 times more electricity than previous attempts at seawater splitting.

"I think we set a record on the current to split seawater," Dai said.

The team even designed a solar-powered demonstration machine that was able to match current purified water technologies.

"The impressive thing about this study was that we were able to operate at electrical currents that are the same as what is used in industry today," said Michael Kenney, a graduate student in the Dai lab and co-lead author on the paper.

Best of all, the technology is not limited to generating energy. Since it also generates breathable oxygen, divers or submarines could also make use of the tech.

In terms of transferring the technology, "one could just use these elements in existing electrolyzer systems, and that could be pretty quick," Dai said.