A team of researchers at the University of Warwick discovered links between brain signals and feeling full. The important research is providing tangible proof for something nutritionists have long suspected.

Like sensing when it’s time to wake up in the morning, most of us have a feeling when we’ve had enough and say “I’m full.” But, is this impulse purely driven by biorhythms, like sleep patterns, or are there a larger set of factors that determine this vital decision we make not only every day but several times throughout the day?

A team of researchers at the University of Warwick have discovered a group of brain cells that direct our appetite. The findings of the study, titled “Amino Acid Sensing in Hypothalamic Tanycytes via Umami Taste Receptors” will be published in the Molecular Metabolism journal thanks to generous funding by the Biotechnology and Biological Sciences Research Council.

University of Warwick Professor of Neuroscience Nicholas Dale said of the significance of the findings:

“Amino acid levels in blood and brain following a meal are a very important signal that imparts the sensation of feeling full,” adding about the surprising discovery, “Finding that tanycytes, located at the center of the brain region that controls body weight, directly sense amino acids has very significant implications for coming up with new ways to help people to control their body weight within healthy bounds.”

Researchers conducted a study involving tanycytes, cells found in the area of the brain responsible for controlling energy levels which, most important for the scientists, send direct messages to the brain about the food we have consumed. The two amino acids reacting most often to these cells are arginine and lysine. The result: we feel fuller with them.

To test this, the team added concentrated quantities of the two amino acids into brain cells that had undergone fluorescent modifications for greater visibility under the microscopes. A response time of only 30 seconds was detected for the receptors to sense the “umami” taste, or flavor of amino acids.

In addition to identifying these important reactions which have control over factors such as body weight and appetite, the scientists compiled a list of mostly fruit- and meat-rich foods which encourage tanycyte activation: chicken, apricots, plums, mackerel, beef sirloin steak, almonds, lentils, pork shoulder, and avocados, among others.

Nutritionists stand to gain the most from this research, as it provided clear, quantitative evidence that supports, or in some cases lends credence to, the opinions and observations they have about which foods naturally contribute to weight loss and better nutrition. 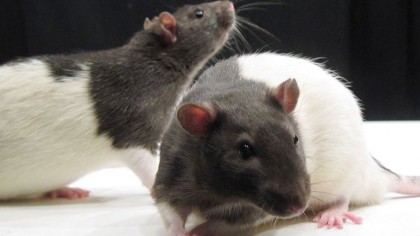 How Does the Brain Create Joy? Ask a Rat.

Another area this research could have an impact on is with treating some eating disorders, particularly those which are genetic, with the appropriate corrective behavior. Prader-Willi syndrome (PWS), for instance, is an example of such a genetic disorder. Sufferers experience a constant sense of hunger, beginning as early as the age of two. The condition of hyperphagia, in which one never feels full, is the culprit in this eating disorder. Though an extreme and rare case, researchers say, studies like this one provide information that behavioral psychologists can put in their toolbox of diagnosis and treatment.

Regardless of what the experts say, it is incumbent upon all of us to make the most informed decisions possible when it comes to what we decide to put, or not put, in our mouths.

Via: University of Warwick, Molecular Metabolism

13 DIY Projects That Will Make You Say “How about No?”

This Cube Is Not Moving: Optical Illusions That Bend Your Brain

12 Gadgets That Will Make You Travel like a Boss