Virtual reality (VR) has made many advancements in the past few years providing everything from virtual cocktail bars to prosthetic limbs aid. However, at the end of the day, virtual reality is an isolating experience since it brings the user alone into a virtual world.

Now, Canadian researchers at the University of British Columbia and the University of Saskatchewan have invented a sphere they say can generate a more sociable virtual reality. Their device is a ball-shaped VR display that can allow up to two users inside a virtual world.

Although there are currently other spherical VR displays, these are limited to showing an image only from a single viewpoint. This novel device uses advanced calibration and graphics rendering techniques to show a "distortion-free 3D image even when viewed from multiple angles."

"When you look at our globe, the 3D illusion is rich and correct from any angle," said lead researcher Sidney Fels, an electrical and computer engineering professor at UBC.

"This allows two users to use the display to do some sort of collaborative task or enjoy a multiplayer game, while being in the same space. It's one of the very first spherical VR systems with this capability."

Perhaps because it mimics the many wonders that could be seen in a crystal ball, the researchers have named their new device Crystal. Just like its name, it consists of a custom-made 24-inch (600 millimeters) hollow ball-shaped display equipped with four high-speed projectors and one camera.

And the researchers are not planning to stop at two users. They are currently working on a new four user system.

According to them, the future applications of Crystal range from everything from virtual reality games to virtual surgery. For the time being though, their main focus is teleconferencing applications. 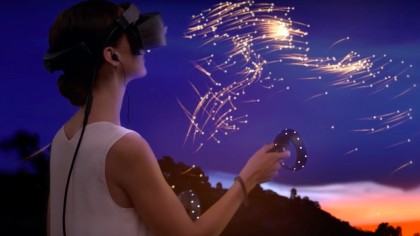 "Imagine a remote user joining a meeting of local users. At either location you can have a Crystal globe, which is great for seeing people's heads and faces in 3D," said Ian Stavness, a computer science professor at the University of Saskatchewan and a member of the research team.

"Or you can have a team of industrial designers in a room, perfecting a design with the help of VR and motion tracking technology."

The researchers have ambitious plans for their novel device.

"We're not saying that spherical VR will replace flat screens or headsets," said Fels, adding "but we think it can be a good option for VR activities where you still want to see and talk to other people--be it at home or in the office, for work or play."

Half-Life Makes Its Debut As a Virtual Reality Game

Half-Life Is Back, This Time with Virtual Reality