Researchers recently demonstrated the levitation of a polystyrene sphere that is larger than the acoustic wavelength- a world first.

The idea behind acoustic levitation has been around for many years with demonstrations of small objects being levitated through ultrasonic waves.  Acoustic levitation is achieved through a unique property of sound that enables objects to remain suspended atop specific pressure regions. Acoustic levitation apparatuses are remarkably simple, comprised of just two main components: Transducers and reflectors. The transducer provides the sound which is directed towards the reflection where it is then reflected back to the source. The device is arranged in such a way that a standing wave is produced, creating constructive and destructive interference.  When an object enters a region of low pressure with a high-pressure underneath, it is able to levitate. With force being directly proportional to the pressure, the force is, therefore, greater in the high-pressure region, creating a net force in the upwards direction, enabling the object to be pushed up. If the upwards force can be matched with the force of gravity, levitation is achieved.

However, an underlying problem remains in that there is a restriction as to how big the object can be.

"This means that, for a transducer operating at the ultrasonic range (frequency above 20 kHz), the maximum particle size that can be levitated is around 4 mm. In our paper, we demonstrate that we can combine multiple ultrasonic transducers to levitate an object significantly larger than the acoustic wavelength. In our experiment, we could increase the maximum object size from one quarter of the wavelength to 50 mm, which is approximately 3.6 times the acoustic wavelength."

Researchers Marco Andrade and Julio Adamowski at the University of São Paulo in Brazil, alongside Anne Bernassau at Heriot-Watt University in Edinburgh, UK, recently published a paper on the acoustic levitation demonstration and their unique approach that enables them to levitate objects much larger than previously possible. Using a tripod configuration, a similar standing wave is created between the sphere and the transducers. By generating another axis of acoustic radiation, a force was created that was able to sustain a load 3.6 times larger than the wavelength.

The technology could have potential uses in medical applications where there is a great risk of bacterial contamination. The experiment marks another milestone in acoustic levitation, but will likely not see use in any levitating vehicles anytime soon. 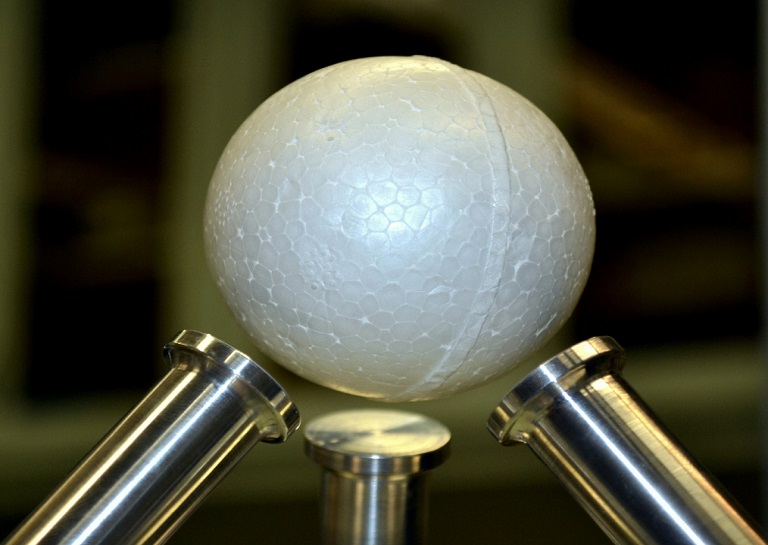