A team from Sussex University is trying to duplicate the sensation of hallucinating in order to better understand how the brain processes what it sees while under unique conditions.

Having an acid trip without the high sounds like a nightmare for most, but researchers from Sussex University have recently figured out a way to combine AI and virtual reality to perfect the experience.

The new device is called the Hallucination Machine, and it's meant to give the sensation of tripping out without actually taking drugs and stimulants. The team from Sussex University's Sackler Center for Consciousness Science in the United Kingdom has been working on this project for several years. They wanted to better understand how the brain processes what it perceives while conscious and how it sorts through hallucinations.

"We're hallucinating all the time," Seth, said in that TED talk. "It's just that when we agree about our hallucinations, we call that reality." 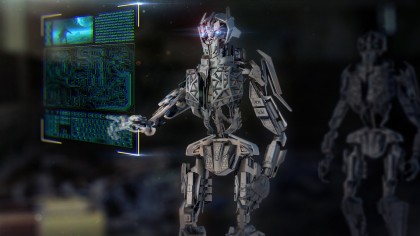 While using LSD and other drugs to induce hallucinations in the name of science has certainly been done before, it's not exactly condoned by the community. It's also harder to quantify a person's individual experience dependent upon how the body reacts to drugs like LSD or shrooms.

The researchers at Sussex University saw a way around that thanks to Google's Deep Dream AI system. It uses neural networks to identify patterns in images. Deep Dream synthesizes pattern recognition the same way that our brains do when it's overwhelmed. Often, this leads to imagining items that aren't even there. In the case of the Hallucination Machine and Deep Dream, it was an excess of four-legged friends.

"One thing people always ask us is why there are so many dogs," one of the Sackler team, cognitive neuroscientist David Schwartzman said in an interview with  The Times.

For the experiment, researchers used an adapted version of Deep Dream to process a wide-shot video of the Sussex University campus. Then, they tried the video out on 12 volunteers. They found that the hallucinations were similar to hallucinations induced by psilocybin. A second experiment was used to determine how hallucinating can affect someone's perception of time. The team had 22 participants say whether or not they felt "temporal distortion." Nearly all of the participants had similar responses to those shown control videos, indicating that while the team might be able to replicate hallucinations with the machine, they can't quite duplicate that time-standing-still sensation just yet.

The researchers hope in the future to adjust the levels that the Hallucination Machine can give. The gradients of low to high distortion could match different levels of how the brain processes what it sees.

If anything, this experiment showcases yet another way that both algorithms like Google Deep Dream and virtual reality are changing how scientists conduct experiments. Technology is getting better at tricking our brains, and the team at Sussex University will continue pushing the limits to see exactly how it's done.

"Overall, the Hallucination Machine provides a powerful new tool to complement the resurgence of research into altered states of consciousness," the researchers reported.

For an additional quick primer on hallucinations, what they are, and how the brain creates them, check out this video from SciShow below:

The biggest challenge right now for researchers is how to compare their results with a relatively small body of research done before them. Their findings have been published in the latest edition of Nature Scientific Reports.

Via: Nature Scientific Reports, The Times