Researchers Might Tell You If Your Body Is Older Than You

Do you ever just feel really old when you aren't that ancient?

Well, a research team out of Brown University just discovered why you aren't feeling so great. After testing DNA fragments, they found health-related differences floating in the bloodstream. 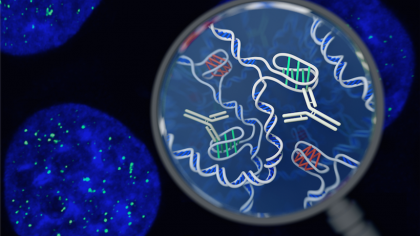 One day, the researchers said, it will be used to test your biological age, which can contradict your chronological one.

“Among other traits, healthy centenarians preserve the epigenomic profile of younger individuals,” lead researcher Nicola Neretti said. “As with anything in aging, many things work together, and it is not clear what the cause or the effect is.

"With our cfDNA test, we hope to gain understanding of these epigenetic changes and what they mean.”

How Will It Change Your Life?

The research, published in the Aging Cell journal, will determine how much cellular stress is happening inside your body.

In the study, older people experienced higher levels of circulating cfDNA. They believe one of the causes of this is "the increased number of senescent cells that can secrete senescence‐associated secretory phenotype factors to drive inflammation."

For younger individuals, the nucleosomes, which is a DNA packaging unit that exhibits a segment of DNA that's wrapped around a protein, were spaced out. They weren't as regular, though, with the older subjects.

“cfDNA is somewhat like a message in a bottle that captures what the cell looked like, epigenetically speaking, before it died,” Neretti said. “A lot of cellular machinery is involved in maintaining nucleosome spacing, and these components can go downhill as you age.

"The nucleosomes don’t move apart or become more dense themselves. The nucleosome spacing is just the read-out of the changes of that machinery.”

While the study only utilized data from a dozen people, each from Italy, it is a major stepping stone in understanding the changes people experience while aging.

Your AirPods Are More Dirty Than You Ever Thought

Don't Panic: Your Motorola Razr Might Have Bumps and That’s Normal

Here Are 5 Reasons Why You Might Suck at Programming