Researchers Model Bat Flight in 3D for the First Time

For the first time, researchers have been able to develop a 3D model of the complexity of bat flight.

Researchers have developed a three-dimensional model of the complexity of bat flight for the first time, possibly inspiring new drone designs.

Engineers at the University of British Columbia (UBC) have modeled the incredible complexity of bat flight for the first time, possibly giving inspiration to the future design of drones modeled after some of the best fliers in all of nature.

In order to build their model, the researchers constructed an aluminum bat wing and subjected it to the currents of a wind tunnel to represent the flapping, bending, and twisting motions that bats use to command pinpoint control of their movements in mid-air.

By tracking these movements in the aluminum wing and measuring the way these movements affected the current whipping through the wind tunnel, the researchers were able to successfully develop a computer model of bat flight in a three-dimensional space.

This model is the first of its kind to detail the flight behavior of bats in terms of the bat wing’s movement geometry, according to Rajeev Jaiman, the study’s senior author and professor of mechanical engineering at UBC.

"Previous numerical models of bat flapping flight were too simplified or incomplete to be of real practical benefit," he said.

Modeling The Geometry Of A Bat’s Wing During Flight

The flapping flight characteristic of bats is possible because of their multiple joints and stretchable membranes that allow them to transform the geometry of their wings in ways that birds and other fliers can’t. 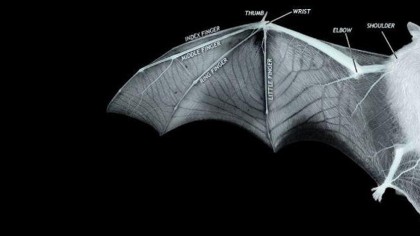 "While this wing morphing makes bat flight much more complicated compared to bird flight, it also makes bats the efficient flying machines that they are," Jaiman said.

The team, in collaboration with researchers at Brown University, now plan to build a physical bat model to further explore the movement characteristics of bat flight.

"We'll be working to further optimize the flapping motion," said Jaiman. "Once this is in place, we'll have a foundation for designing efficient, agile, automated bats—think smart drones that can fly as a flock and serve as tools for business or for emergency response."

The teams computer model was described last month in the journal Computers & Fluid.