Teams of physicists from the University of Geneva and the Max Born Institute managed to control an electron by using a unique laser technique.

Most secondary students understand the elements that make up an atom. These building blocks of matter consist of electrons moving around a nucleus, and those electrons dictate a large part of an atom's interaction with another atom. Electrons can at times be torn away from a nucleus via an electric laser, overcoming the force keeping it to its nucleus. It's this action that recently intrigued a group of physicists from Switzerland who set out to discover whether electrons could fall somewhere in the middle of these two states.

The original theory was proposed by Walter Henneberger over 50 years ago. Henneberger wondered if there was any way to free an electron from the atom while still keeping it near the nucleus. Henneberger's contemporaries wrote his theory off as nearly impossible. However, physicists from the University of Geneva in Switzerland and researchers from the Max Born Institute in Berlin, Germany managed to see Henneberger's theory become a reality.

For the first time ever, the teams freed an electron while also keeping it bound to its nucleus. The team also identified an important new area called "Death Valley" where physicists would lose all power over the electron.

The researchers also showcased how effectively lasers could be used to study this phenomenon. General understanding of lasers' interactions with electrons are that the more intense lasers are, the easier it should be to ionize an atom (remove and free the electrons). The researchers quickly found out this is not necessarily the case.

"But once the atom is ionised, the electrons don't just leave their atom like a train leaves a station, they still feel the electric field of the laser," explained Jean-Pierre Wolf, a professor at the applied physics department of the UNIGE Faculty of Sciences. "We thus wanted to know if, after the electrons are freed from their atoms, it is still possible to trap them in the laser and force them to stay near the nucleus, as the hypothesis of Walter Henneberger suggests."

The physicists had to find just the right shape for the laser to be effective. It needed to oscillate closely enough to the electron so that its energy and state remained stable.

"The electron does naturally oscillate in the field of the laser, but if the laser intensity changes these oscillations also change, and this forces the electron to constantly change its energy level and thus its state, even leaving the atom. This is what makes seeing such unusual states so difficult," explained Misha Ivanov, a professor at the theoretical department of MBI in Berlin.

The team then made an interesting and unexpected discovery. 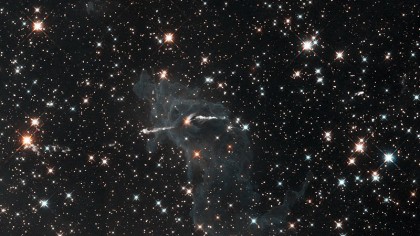 "Contrary to natural expectations that suggest that the more intense a laser is, the easier it frees the electron, we discovered that there is a limit to the intensity, at which we can no longer ionise the atom," observes Misha Ivanov. "Beyond this threshold, we can control the electron again."

That threshold was called Death Valley.

The discovery is one that not only proves a long-standing hypothesis but also could mean larger implications for physics as a whole.

"This gives us the option of creating new atoms dressed by the field of the laser, with new electron energy levels," explained Jean-Pierre Wolf. "We previously thought that this dual state was impossible to create, and we've just proved the contrary. Moreover, we discovered that electrons placed in such states can amplify light. This will play a fundamental role in the theories and predictions on the propagation of intense lasers in gases, such as air."