After an international collaboration among 14 different research institutions, researchers take the clearest image yet of the supermassive black hole's immediate area at the heart of the Milky Way.

New research by an international team of scientists reveals the surprising results of a coordinated effort between 14 research institutions around the world to capture a clear image of the black hole Sagittarius A* (Sgr A*), long-suspected to be the supermassive black hole at the heart of the Milky Way.

Sagittarius A*: The Elusive Omnivore Lurking in the Galaxy's Center

Black holes are some of the most exotic structures in the Universe, objects so incredibly dense and relatively small that their gravity prevents light from escaping. So far, no one has ever "seen" a black hole, and they have only been detected indirectly by the effect they have on other, visible objects like stars.

That makes supermassive black holes, objects of relatively small dimensions but millions of times more massive than the Sun, subjects of intense speculation and study. At the heart of many galaxies is a supermassive black hole, and Sgr A* sits in the center of ours. Sgr A* is 4 million times the mass of our Sun and only 44 million kilometers in diameter, a little less than the distance between the Sun and mercury.

Sgr A* can't be seen visually for any number of reasons, but most important is the spiral arms of the Milky Way whipping around the core, obscuring the center of the galaxy behind enormous clouds of dust and gas that light cannot penetrate, so the only way to observe it is using infrared, x-ray, radio, and gamma waves that are released in the frenzy of activity around the event horizon.

This is not without its own problems, however. Along the line of sight from the Earth to the supermassive black hole, pockets of gas of differing densities and compositions disrupt and distort these waves in a process called interstellar scattering. So where we hope to see a clear image of the black hole's structure and its surroundings, all we can see is a bright fuzzy mess.

This was the challenge the Event Horizon Telescope (EHT) hoped to overcome. The EHT has assembled a network of radio telescope stations from around the world to create a virtual radio telescope 8,000 miles wide.

Using what's known as very long baseline interferometry (VLBI), the EHT is able to sharpen the resolution of the radio telescope network as a whole by having every telescope observe the same point in space. This achieves an effect similar to using a bigger mirror in an optical telescope to see more distant objects by effectively creating a radio telescope the size of the Earth's diameter.

Turning toward the heart of the galaxy, the EHT began the coordinated observation of Sgr A* in April of 2017. After several days of recording, EHT had gathered 1,000,000 Gb of data. This data was flown to processing labs in the United States and Germany to be analyzed and hopefully assembled into a complete picture of the supermassive black hole, a process that has taken almost 2 years.

Cutting Through the Noise

After many months stitching together the data, a paper published this month in The Astrophysical Journal announced that EHT had succeeded in capturing the clearest ever image of a black hole's immediate surroundings.

They were able to identify and filter out nearly all of the interstellar scattering thanks to the work of Michael Johnson of the Harvard-Smithsonian Center for Astrophysics "Even though scattering blurs and distorts the image of Sagittarius A*," he said, "the incredible resolution of these observations allowed us to pin down the exact properties of the scattering. We could then remove most of the effects from scattering and begin to see what things look like near the black hole."

The image of the black hole revealed something no one was expecting. In particular, the source of the radiation from Sgr A* was smaller than they had been anticipating, and more importantly, the morphology of the source region was highly symmetrical.

According to lead author for the paper, Nijmegen Ph.D. student Sara Issaoun, "this may indicate that the radio emission is produced in a disk of infalling gas rather than by a radio jet. However, that would make Sagittarius A* an exception compared to other radio-emitting black holes."

When Looking Into the Abyss, Does the Abyss Look Back?

As stars and other materials are devoured by a black hole, long before they reach the point of no return, the intense gravitational force acting on the material creates a sheering effect that rips apart anything that gets too close.

This forms the accretion disk of material that surrounds the central mass of the black hole, spinning around it at speeds approaching a percentage of the speed of light.

The incredible energy of this process means that not all of the material is actually consumed. Some of it is ejected back out into space in very narrow jets at nearly the speed of light from the poles of the black hole. This process, violent and at very high energy, produces a lot of radio waves that follow the path of the jets. 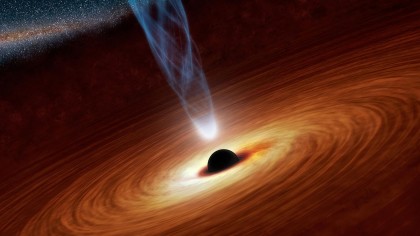 In either case, the observations of Sgr A*'s radio source point to highly improbable conclusions and already heated debate over the nature of this source region is underway.

Heino Falcke, professor of radio astronomy at Radboud University and Issaoun's supervisor, has conducted independent research into Sgr A* for nearly 30 years, telling National Geographic, "they are the ultimate endpoint of space and time, and may represent the ultimate limit of our knowledge."

Once a skeptic of a radio jet as the source of Sgr A*'s radio waves, late last year, Falcke was part of an effort that found similar evidence for the radio jet conclusion. Once a skeptic, he is now much more open to the idea: “Maybe this is true after all and we are looking at this beast from a very special vantage point.”

Further study will be required to fully determine the nature of Sagittarius A*'s radio source, but with the upcoming observations the EHT wants to conduct of Sgr A* at 230 GHz, excitement is building that we may soon see the shadow of Sgr A*'s event horizon, giving us our first ever visual confirmation of the existence of black holes.

“Even though scattering blurs and distorts the image of Sagittarius A*," said Johnson, "the incredible resolution of these observations allowed us to pin down the exact properties of the scattering. The great news is that these observations show that scattering will not prevent the Event Horizon Telescope from seeing a black hole shadow at 230 GHz, if there's one to be seen.”