Researchers from the University of British Columbia have developed a new material that may help make buildings earthquake-proof. The product is made of polymer and fly ash.

By  Jessica Miley
Oct 13, 2017
The EDCC getting sprayed on a block wall in the UBC lab. UBC/Flickr

Earthquakes have the ability to destroy buildings quickly and comprehensively with a devastating loss to human life. Engineers and architects around the world dedicate their lives to finding ways to ‘earthquake proof’ buildings for construction in earthquake-prone areas.

Researchers from the University of British Columbia developed a new type of 'concrete' that has ductile properties, allowing it to bend rather than break under pressure. Concrete is one of the most popular building materials around the world. It's relatively cheap, quite easy to work with, has a long life and is resistant to fire. However, it's very vulnerable to the stresses caused by seismic events. The production of concrete is also very damaging to the environment. One of its main ingredients is cement. Cement has its own issues, as the team from UBC noted in their research. 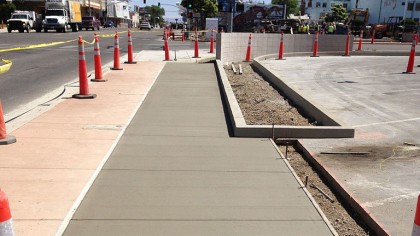 The new material called EDCC solves both the structural and environmental problems of traditional concrete. EDCC replaces almost 70 percent of the cement normally used to make concrete with fly ash. Fly ash is a byproduct from burning pulverized coal in electric power generating plants. It's created during combustion when mineral impurities in the coal fuse in suspension and float out of the combustion chamber with the exhaust gases. It can then be captured and used for other purposes.

The reduction in the use of cement address one of the most relevant environmental problems for the construction industry. Banthia says, “By replacing nearly 70 percent of cement with fly ash, we can reduce the amount of cement used. This is quite an urgent requirement, as one tonne of cement production releases almost a tonne of carbon dioxide into the atmosphere."

EDCC is also created using polymer-based fibers that provide its flexibility and strength. The final product is more like steel than concrete. Most importantly, unlike existing building materials, it is extremely ductile. This means it can warp and bend when under pressure rather than crack, crumble or twist like concrete and steel do. The CBC Researchers sprayed a 10 mm layer of EDCC onto concrete block walls before putting the walls under a simulated stress similar to the magnitude 9 earthquake, that struck Tohoku, Japan in 2011. The same pressure was placed onto a regular unreinforced block wall which collapsed at about 65 percent intensity of the Japanese quake.

Luckily for us, EDCC isn’t just a prototype. It has been developed into a commercial read-product that has been awarded as an official seismic retrofit option in British Columbia, Canada. For many retrofit projects, EDCC will not only make sense from a strength point of view but will also be more cost-effective than traditional methods of steel bracing. It is currently being installed into a local primary School in Earthquake risk area, Vancouver. The researchers hope to also use EDCC in seismic retrofits in areas in Northern India which experience a lot of seismic activity.